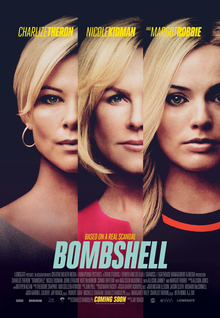 OVERALL: I wanted to see this movie when it entered the theaters. I saw the teaser trailer and thought “Oooooo. That looks good.” Yesterday I reviewed that exact trailer. I didn’t get to the theater however I was saved by streaming media* and finally got to watch the amazing movie that is Bombshell. Every cheer, every award, every ounce of praise was deserved. Bombshell is an amazing bit of cinema, effortlessly and artfully catching a moment in time. See it.

Note: This movie might trigger some as it deals with sexual harassment. I have to say I was not triggered. However that is me. If you think you might be but still want to watch the movie, go for it. Have a friend ready to talk and know you can stop the movie and walk away.

POINTS: This was a masterfully made movie. It could have taken the easy way out and just been a good movie. I mean the subject matter/history alone was a good story. However everyone in this project dug deep into their creative abilities and soared with the eagles. This movie is masterfully made. Well done all around.

PITFALLS: So powerful I don’t know if I could watch it again. I will one day. However, actually, this is a compliment so no pitfalls.

FEMALE CHARACTER(S): Obviously. You have Megyn Kelly (Charlize Theron) and Gretchen Carlson (Nicole Kidman)  on the screen sharing their real life experiences. You have Kayla Pospisil (Margot Robbie) as the amalgamation of many characters and experiences living through the humiliation every day.

I must also now PRAISE the actresses for their INCREDIBLE portrayals of Megyn Kelly and Gretchen Carlson. Yes Theron and Kidman transformed themselves. They didn’t rely on the prosthesis word, BTW. They changed their behavior and voices to give honor to their characters. They both deserved awards. As does Margot Robbie. We got to see her enthusiasm and vulnerability and she did a wonderful job.

CULTURAL PITFALL(S): None. This was a movie that dealt with sexual harassment honestly and openly. Talk about taking on the big issue and never flinching. Nor going over the top. Just looking at it, studying the events, step by step. Masterful.

1.) The Acting. Just wow. When a movie has to begin with an announcement that the people in the movie are being PORTRAYED by actors you know they knocked their portrayals out of the park. Just WOW. Great job everyone. Looking at you too John Lithgow as Roger Ailes. Well done.

2.) Make-up. Just wow. When a movie has to begin with an announcement that the people in the movie are being PORTRAYED by actors you know, wow. Great job. Seriously. Just watch this video and marvel: Prosthetic Designer Breaks Down Transforming Charlize Theron Into Megyn Kelly | Vanity Fair.

3.) Director Jay Roach and writer Charles Randolph. These are two men who wanted to make a movie about women fighting being sexually harassed. Gentlemen, thanks for reminding me there are wonderful men in the world. I’m married to one so I know there are. It is just really nice to be reminded. Well done.

4.) Gretchen Carlson taped everything. Let that be a lesson to you. Tape the abuser abusing you and then let them suffer. Well done Gretchen. Well done.

RACIAL BECHDEL TEST (Website): 0 of 3. Well wow. Totally needed improvement. Then again, it was a movie about Fox News and they are not known for caring about anyone who isn’t European descent white.

* Thank you to everything that is good in the world for streaming media. The world I’ve always wanted to live in is finally here.