This Page Shall Now Begin Recounting

That Was the Heart of

the Incredible and True Story

of the Adventure That Was

My sign for Avengerville for my social media sites and office door.

Yes, when I woke at 9 am on May 1, 2014, my heart was pounding. This was THE day!!! Showered, dressed, put on make-up, and then Hubby and I went to get a light breakfast in the Sofitel Tea 5 cafe. Please Note: I am a coffee snob and Tea 5 made the best latte I have ever had. *sigh*

Then back upstairs to brush teeth and do a last minute check to be sure we had everything. After brushing my teeth Hubby said that the driver was in the lobby! (In my mind he said “THE DRIVER IS IN THE LOBBY!!!!”) The driver, who I shall now call Driver M., would be waiting for us by the black Mercedes.* We grabbed our bags – I had my purse and Joey Tote, Scott had his briefcase – and went downstairs.

And now for a moment of an aside that I shall call The People.

I need to stop right now and let you know that everyone on the set and involved with Avengers 2 was kind, gracious, good, and wonderful! I mean everyone! Everyone smiled at us, was polite and gracious, kind and courteous. It seemed as if everyone wanted to be a good host and they were. This also includes the actors and I will get to that. So just imagine being guided by angels and treated like a saint and that will help you understand the day a bit more. 🙂

And now back to the story.

Driver M. was a blast! He greeted us a huge smile and helped us into the car. Hubby and he laughed because Hubby almost got into the driver’s seat due to English cars having the driver’s seat on the right. The Mercedes was luxury incarnate and Driver M. told me the the seat I was in was set up for a laptop. Great I said, I felt right at home. As he drove us to the studios Driver M. said that he had been a professional driver for many years and enjoyed driving his celebrity clients.

The English countryside was beautiful and Driver M. filled us in on the recent flooding, the cost of homes in the area, and the roadside sheep! Yes there are roadside sheep. The sheep help keep the grass “cut.” Cool. Hubby asked if the sheep had ever been stolen. Driver M. said yes but that now they didn’t seem to get stolen anymore so he guessed everyone who wanted one had one.

About 20 minutes later we arrived at Shepperton Studios. I was a bit shocked because the entrance looked like an English neighborhood. That image vanished the minute we drove in. Shepperton Studios is made of many, many, buildings of various sizes, shapes, and ages. You have small to HUGE. The roads running through the buildings do look like small neighborhood roads in how they twist and turn. However people ride around on what I thought of as golf carts.

Driver M. let us out and we were greeted by P. from Joss’s office, Head of Security (HoS), and C.M. who works for Kevin Feige (Marvel movie producer). What lovely people! I had brought presents for those who had helped us so I made sure to give P. his IU shirt and School of Public Health-Bloomington water bottle. I felt bad I didn’t have anything for C.M. or HoS but they didn’t seem to be too upset. They were, as stated before, lovely hosts.

We said good-bye for now to Driver M. and C.M. and HoS took us to the main Marvel office. The head, the brains of the Marvel Cinematic Universe here at Shepperton Studios. I am happy to report it looked just like any other busy office – except for the Marvel stationery and labels. People were hard at work on their computers, at desks, on the phones, conferencing with one another, and of course filing. C.M. and HoS introduced us to the office and they all said hello. So cool.

Hubby and I then got to see the locations office. It was attached to the main office. In this office were photographs of locations for filming. One picture showed a green farm land location for the Midwest that was actually in England. I showed Hubby and we both laughed. It looked right! I don’t know if the below picture is THE location we saw in the photo in the office, but when I saw the picture below, well, let’s just say it looks awfully close.

After the office visit, C.M. and HoS took us to the Costume Shop! Oh yay! I love the costumes – of course – and have a buddy who is a professional seamstress who would have been happy to spend the day in the shop caring for the clothes. The Costume Shop was in another building so off we went through the twisting paths in Shepperton. Good thing we were being led as I would so have gotten lost.

The Costume Shop was huge. It took up one floor of a two story building and had both the shop where they made the costumes AND the storage room. The Costume Shop Manager (CSM) was wonderful. He was so enthusiastic about his work and it was great to talk to him. I had a friend who wanted me to ask a specific question so right away I said to him “I’ve got a friend who wants to know, do you sew pockets into the costumes?” Well that set off a good laugh! “Oh right,” said CSM, “we put pockets in costumes so the actors can put their cell phones and scripts in there to get lost. NO we do not put pockets in the costumes!!” We all laughed. I was told that losing scripts was a big problem for the set so no, no pockets for anyone. Now you know.

We then got to LOOK AT THE COSTUMES! Yes, I admit, I did touch them. There were between eight or ten copies of Hawkeye, Black Widow, and Thor that I saw immediately. Yes I touched them all, yes it was amazing.  The costumes are so beautifully crafted and constructed. You can tell they are built to last AND look good too.

The CSM showed us sketches of the characters’ costumes in particular the Scarlet Witch. CSM said the image came right out of Joss Whedon’s head and looked very much like the pictures that have already been released of the Scarlet Witch. (See below.) He also showed us a piece of cloth that was specially created for the Scarlet Witch. We were told that one of the cool thing about professional costume shops is that if they can’t find the right material, they can request it be made for them!!! The specially made material was gorgeous and made the belly dancer in me want it for a hip wrap. Alas, I had to leave it behind.

Also in the shop were many seamstresses. They had lots of overhead and natural light for their work. Their machines looked larger than usual sewing machines to me and extra sturdy. They too were friendly and seemed to wonder at first, who these strange people were who were getting the tour.

We then got to go into the storage room. Oh no, this was not a dark and musty room – this room was lit, clean, and orderly. I got to touch a lot of Asgardian armor BTW because it was stored in boxes. OMG. The CSM showed us the many rows of costumes that were organized according to location and/or people. One row had police style uniforms. Hubby said “Hey according to Putin you can buy those online.” The CSM nodded his head. I did a bit more costume touching before we said good-bye and went to our next stop.

Our next stop was the Prop Shop. This was located on the ground level and we were once again led in by the wonderful C.M. and HoS. When we walked in there on the right were a dozen Captain America Shields! Squee! I reached out to them but then stopped myself. I did not want to be rude. Then I heard the very happy and welcoming voice of the Prop Shop Manager (PSM) who said “Touch it! Touch everything!” YAY!!! So I went and touched all of the Shields** ’cause it was cool. Yes PSM was just as excited about his work as CSM.

Hubby and I also made sure to pay respects to the Prop Shop Dog (PSDog) because PSDog clearly has a Job To Do and that is vett (or check-out) everyone who comes into the shop. If we did not properly pet PSDog, we were not welcome. Good thing Hubby and I both LOVE dogs and pet this lovely dog quite a bit.

Back to the Shields.

Even though there many shields on my right two more prop makers were in the room each creating a new Shield. Hubby and I were told that there were many copies and versions of the props made to reflect the action in the movie – some of the Shields looked scratched or smudged – and also to use as backups. The Shield that Chris Evans carries in the movie is made of latex – lighter, more flexible, and won’t hurt anyone if they run into it.

We also got to see Thor’s Hammer, aka Mjolnir. We got to touch several versions of Mjolnir including one that was soft foam and even I could squeeze together. They were BEAUTIFUL mind you, but foam.  Beautiful foam.

The Hero Prop. Now for those glorious close-ups of our favorite Shield and Mjolnir, the Hero Prop is made. It is metal, heavy, and every detail is tended to. Hubby and I got to examine Mjolnir. It was beautiful metal and very dense and heavy. PSM informed us that the etching on it was done in acid. I asked PSM if the runes said “Let he who is worthy-” PSM then rolled his eyes and said “Oh you Geeks! We had to change it from the first movie because we didn’t have it right.” Hey we should always be consulted.

We then went into a second room where I got to examine and touch (yeah, me and touching) Black Widows guns and Hawkeye’s arrows. Oh so cool. Other props were being built but I had no idea what they were other than very pretty. There were close to 8 people each working at a desk on a prop or part of one. I looked up to the wall behind one of the work desks and saw the famous fan created/Tumblr posted Thor: The Dark World movie poster (see below).  Oh yeah, everyone at Marvel has a great sense of humor.

This fan made Thor 2 poster makes everyone laugh.

It was at this point that PSDog tapped me with his foot and sat down next to me, waiting for more petting. One of the prop makers tried to stop the dog but hey, I know who to pay attention to and I do love dogs. PSDog got another round of petting. 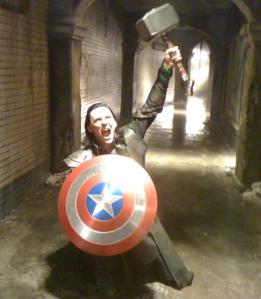 Apparently this is a picture Tom Hiddleston sent to both Hemsworth and Evans.

Our day wasn’t even half done and Hubby and I were filled with great sights, sound, and feels! This is probably what being in Heaven feels like.

Part Four will deal with our first on the set experience! 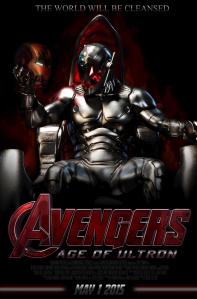 Oh just pull the plug on this guy.

*Yes I admit, my heart is pounding in excitement just remembering and writing this down. I’m such a Geek.

**Yes the word is capitalized because it is Captain America’s Shield and deserves a capital.