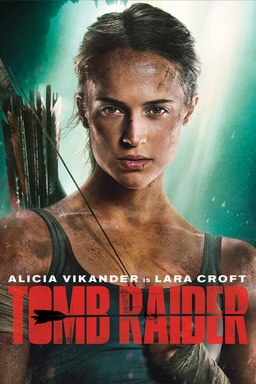 Back in the early days of computer gaming there was almost a time when female heroes in action adventures were okay and not a reason to gather and howl at the moon as they are now. They weren’t common, but they were popular without a lot of fanboy backlash. Lara Croft became famous for her large breasts and jumping ability with a large gun strapped to her generous hips. She was great at solving puzzles and getting through dangerous situations. I played it a couple of times and it was fun, though I was terrible with the jumping part because you had to be, you know, coordinated.

Years later a movie starring Angelina Jolie was made based on the character. I learned a few things watching that film. She has perfect Lara Croft shaped breasts, which did make me laugh when the filmmakers made a point of it. Product placement at its most humorous. I also learned she can’t run worth a damn. I didn’t go to the theater to see the newest incarnation of Lara Croft, though with the changing times we’re at least graced with an actress who can run a little better and jump and fight and solve puzzles. This time her breasts aren’t showcased in the same way, but she does eventually end up with the traditional bandage on her upper arm.

This classic early computer game featuring a women hero has been twice turned into a film about a girl who grows up pining for her daddy who goes on adventures to prove herself to absent dad and maybe find him along the way. I don’t remember Carl Urban pining for his mommy while battling demons in Doom, or cracking brotherly jokes during Dredd. I’m just saying, why does there HAVE to be a huge emotional aspect to what is essentially a running and jumping and clue solving fun time, beyond the obvious answer of Because She’s A Girl.

Lara demonstrates her adventurous chops right off the bat with a really well done bicycle chase scene in London. I was pleased with most of the adventure sequences, but felt they weakened as the movie progressed, in direct proportion to how emotionally involved Lara becomes in the race to find and thwart the use of an ancient, evil Japanese queen. Himiko actually was an ancient, nearly mythical Japanese queen, but not evil so much as famously reclusive. I liked how much of her original story was used, as it may make more geeks like me look her up. The game was originally supposed to be a sort of female Indiana Jones, and I got a lot of Indiana Jones and the Last Crusade vibe off of several scenes in the movie. I don’t know if that was intentional on the filmmakers’ part or not but I found it a little irritating because that’s one of the weaker Indy films.

The film is international in scope, so Lara can run and jump in several cool places. It also provides an opportunity to have an Asian actor as a co-star. Both are gorgeous and ripped, so they’re fun to ogle at the very least. Neither of them had enough emotional pull for me to entirely care about their journeys.

As action adventure movies based on a computer game or comic goes, Tomb Raider is not a bad film. It’s mostly well-paced and mostly well acted with mostly well done action sequences. If you’re not reaching for the pinnacle, see this movie. It’s also good for enjoying good looking actors in fun locations and will make you more nostalgic for the old game than the first film.