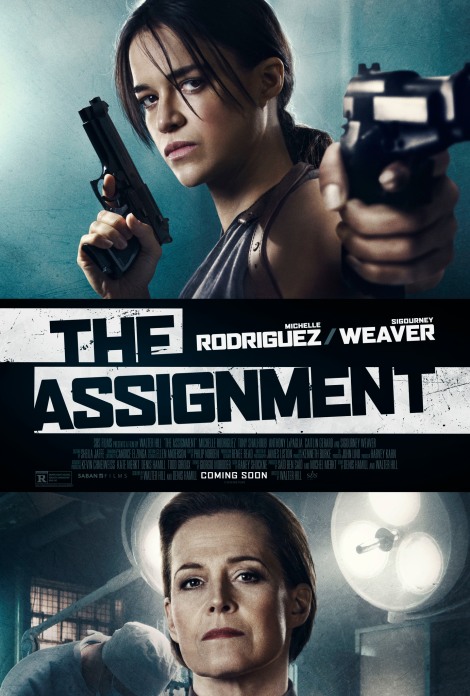 OVERALL: Oh my what a wild ride!!! The premise itself sounds crazy! A hitman is “punished” by having gender reassignment surgery performed on him to turn him into a her. How the the hitman deals with that is the full premise of the movie.

It is a wild, wow ride. Just writing his makes me want to watch it again.

POINTS: I think what stood out for me was watching the hitman, Frank Kitchen, deal with being in a woman’s body. In other words, he had to get used to how people saw him. They saw him as unthreatening. Which is funny because Frank is who he is: A hitMAN.

Plus, well check out what I wrote about Sigourney Weaver and her character below.

Oh and Weaver and Rodriguez never have a scene together. They reference each other, but never share a scene. Just so cool.

PITFALLS: Hmmm. Can’t think of anything.

FEMALE CHARACTER(S): Well yes. Sigourney Weaver plays Doctor Rachel Jane who has a questionable moral compass (as in has none). Her cold and calculating delivery of her lines. Her character’s enjoyment of being smarter than everyone else in the room is perfect. It is funny because the character is cold but Weaver has a lot of passion as an actress. Seeing her so cold is a joy to watch.

Now for Michelle Rodriguez. Rodriguez carries this movie. Her portrayal as Frank Kitchen, the man is WOW! Rodriguez makes a very good looking man. Even though Rodriguez is a gorgeous woman, when she is Frank in a woman’s body, you can see how uncomfortable, scared, and angry the character is. It’s just wow. Wow! Rodriguez gets an Unsung Acting Hero Award from me right now. Forever.

CULTURAL PITFALL(S): Well. Huh. I don’t know. I think the idea that women are better than men because they are kinder is trashed. Thank goodness. I would be interested in hearing what members of the trans community feel about the movie.

NOW: I did look up things online and noticed that many saw this as negative and transphobic. I can see why people would say that. However, and Hill says this, a person is who they are. So if someone knows they are in the wrong body, when they change they are still that person. In a way that is what happened to the hitman. I think the bigger thing to explore is how did the world treating Frank as a woman changed him. Him? Yes. Frank’s body may look female, but for him, he is male. He is a man. That is who he is.

If is fun to see gender stereotypes slapped. These two characters do just that.

RACIAL BECHDEL TEST (Website): Wow. I don’t remember so my guess is 0 of 3.