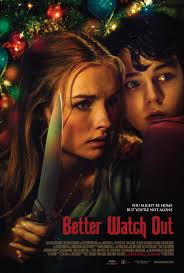 I had heard good things about this movie and was hopeful that I may have found My Christmas Horror Film. It started well enough, with classic Christmas music scoring the opening credits in classic 70 horror movie font as a perfect snowy Frosty on the front lawn of a perfect middle class street is evilly slain by the neighborhood bully. In thirty seconds we know exactly where and when we are.

Inside a completely unremarkable middle class house a too hip mom asks her husband if he’s ever sucked cock because of the presents he gives. The husband is easy going, if a little creepy toward the hot sitter watching their twelve year old. She’s been there enough times to know everything is cool.  Upstairs, the otherwise smart boy is delusional about “boning” his babysitter.  In some foreshadowing, he and his friend also discuss Home Alone.

The movie continues to go nowhere for a while, setting a lighthearted mood, foreshadowing like crazy every prop used later, and getting us intimate with Ashley and Luke. Jump scares, first with a spider then a mysteriously open back door seem like red herrings. We’re supposed to think Ashley is tougher than she looks.  There’s more classic horror film foreshadowing – a mysteriously opened door, a softly swinging seat, classic no one answers phone call – that makes you wonder how many times the writer watched Scream in his jammies. You think you know what’s coming as the film works hard to be innocent and foreshadowing scary at the same time, and sure enough, it goes there.

Then I got whiplash from the wickedly surprising hard turn. Fortunately, I had plenty of time to recuperate while the film goes on and on and on with the surprise and we’re left waiting for the bad guy to get his much needed comeuppance. Before the end there are attempts at pathos which bounced off my hard old heart, some mildly thrilling moments that may work better on someone less jaded and plot devices we’ve seen a million times. Horror movies in the last forty years have gone from grainy scream fests working one idea hard for an hour or so to glittering cinematic jewels working one idea hard for two hours or so. The guys who make these encyclopedia movies (massively referenced) never seem to notice that the old films that climbed into the history books had more going for it than oooh kewl.

I felt the filmmakers were too concerned with showing off their 80s movies acumen over making even a slightly nuanced film. I didn’t detect any updating beyond the house having internet and the characters having cell phones. It’s slick and pretty and none of the actors are galling but there’s nothing new beyond that one surprise if you’re also familiar with 80s horror movies. I didn’t hate Better Watch Out, but felt a little disappointed the filmmakers were so excited at their gnarly idea that they stopped there. Watch this if you like revisiting the days of big hair, shoulder pads, and heroes too cool to be in their own movies, and if you’re content with seeing how the one big surprise works itself out.

CFR: In Addition: Sorry for the late post – my bad. And so not gonna watch this.