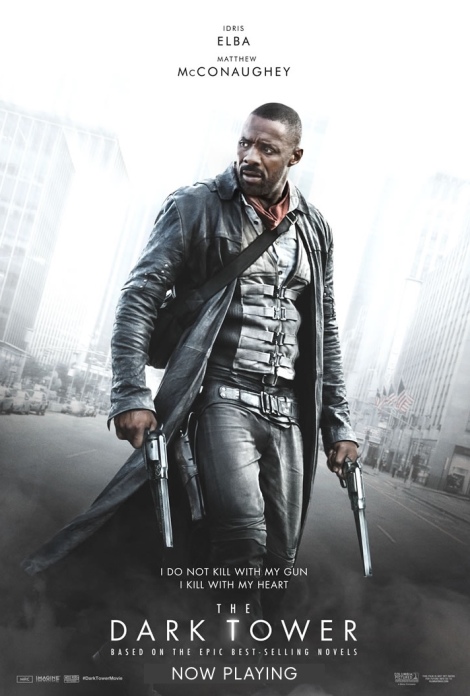 OVERALL: First things first: I have never read The Dark Tower series so yes my review reflects what I have heard about the books, gleaned from the Internet, and the movie itself. If I am wrong about story facts, now you know why.

This movie was ok to good. It lacked soul. That indescribable thing that make an ok or good movie great. (See The Avengers.) My guess is this is why so many fans were disappointed – no soul. I’m sure that the cast had the chops to perfectly portray their characters, I just don’t think the director had the chops to bring the soul of the movie together. Still it was a fun watch.

And yes, just writing this review makes me want to read the books.

POINTS: Idris Elba and Matthew McConaughey. I would have enjoyed more scenes of them sending hatred to each other. I wanted them on screen together more. Don’t know if that happens in the book, but ooooooooooo I wanted more of that.

FEMALE CHARACTER(S): Several fun women in secondary roles that I enjoyed. Claudia Kim was compelling as a psychic (in fact, I’m ready for a movie about her)  and Abbey Lee was a sympathetic child. We did see lots of women and Women of Color in this movie in the background and that always makes me happy.

Annoying character was the mom played by Katheryn Winnick. She did a fine job of portraying a character I wanted to slap for her absolute cluelessness and poor mom skills. Good job!

CULTURAL PITFALL(S): Well a higher Bechdel test rating would have been nice.  I’m cool with the 1 of 3 because OMG so many multicultural faces in this movie made me so happy.

1.) Idris Elba. The man has supersonic movie star charisma. Could he have been better used in this movie? Yes. Was he still the ultimate knight in shining armor/gunslinger? Oh Hells YES!!! He is fantastic and I loved watching him sling those guns!

2.) The Gunslinger’s Creed. Love it for so many reasons. 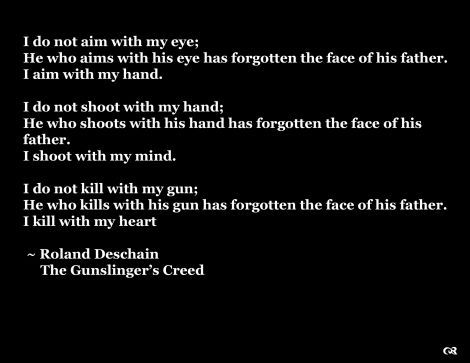 3.) First line of book. I have read that the first line of the series is in the graphic below. It is very powerful. That chase would be interesting to see. And in the movie when this was spoken over the images I thought “Wow.”