I was lucky enough to have seen this movie in 3-D when it was in the theatre.  Lucky because it’s a stunningly beautiful film in 3-D, to the point of actually making a totally red planet look gorgeous.  There were several huge shots of astronaut Mark Watney driving a rover through the alien landscape and I remember my jaw dropping a few times.

Great scenery wasn’t the only thing the film has going for it.  Matt Damon plays astronaut Watney, who is a botanist/engineer left for dead on Mars from an accident during emergency evacuation. Once alone, he must deal with all the dangerous events that will befall a traveler on an environmentally hostile planet, and figure out how to not starve to death before the next ship arrives in four years.

Sounds pretty grim, right? The Martian was nominated for a Golden Globe in the comedy category, and there are many laugh out loud moments. As a movie goer I especially love when I get a joke first, and as a space science geek there were several opportunities for me to laugh before everyone else in the theater – my favorite was the Outer Space Treaty of 1967 joke.  *wiping a tear* Man, that was hilarious.  You will also love the Fellowship of the Ring joke.

There is a lot of science in this movie.  At one point he comments he’s, “going to have to science the shit out of this.” Almost all of what he does is feasible, which is so incredibly unusual for Hollywood movies, and there are a few things that NASA still cannot do, but they’re working on it.  That’s okay, since it’s science fiction, not a PBS documentary. The result is watching a film that doesn’t tear you out of your suspension of disbelief with a, “That’s STUPID!”

Matt Damon is phenomenal, and the supporting cast is a Who’s Who of Hollywood.  He’s a great actor with a believable physique who looks and sounds intelligent.  What has worked for decades in the Bourne films works even better here. That he has a great script developed from a great book doesn’t hurt at all.  The soundtrack is awesome, and not once, not twice, but several times during the movie a montage built around a great song propels the story in an enjoyable fast forward.   They don’t show everything from the novel, but these sequences allow them to throw in a ton of stuff that would take two extra hours in a normal movie.  And they’re fun.  Being a Disney baby I also appreciated the feel good quality of a movie that showcases the best of humanity, not only with Watney’s skill and fortitude, but the insane idea of people working together to save someone.  Nuts, right? 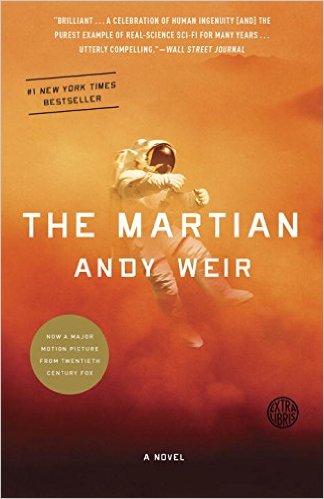 Fortunately, I read the book after watching the movie and discovered that I “heard” Mark Watney’s voice the whole time.  Normally I hear, you know, myself while reading, but there was so much voice over in the film – another way to fast forward the story in an entertaining way – that the highly technical book sounded like an extended voice over in my head.

Author Andy Weir wrote The Martian and released it into the wilds self-published as a 99¢ Amazon special.  It’s his first book.  We hates him. (No, of course we don’t, we’re just insanely jealous.) Within four years it became one of Ridley Scott’s finest films, IMNSHO.

The book is as brilliant as the movie.  It sometimes reads like this:

I thought about the atmospheric regulator. It pays attention to what’s in the air and balances it. That’s how the excess 02 I’ve been importing ends up in the tanks. Problem is, it’s just not built to pull hydrogen out of the air.

The regulator uses freeze-separation to sort out the gasses. When it decides there’s too much oxygen, it starts collecting air in a tank and cooling it to 90 kelvin. That makes the oxygen turn to liquid, but leaves the nitrogen (condensation point: 77K) still gaseous. Then it stores the 02.

But I can’t get it to do that for hydrogen, because hydrogen needs to be below 21K to turn liquid. And the regulator just can’t get temperatures that low. Dead end.

Oh!  You’ll have to read it to find out.  When it’s not channeling your high school science books, The Martian is laugh out loud funny, which is probably why the movie is funny as well.  If you’ve seen the movie you will find in the book the answer to the question: What did Watney type!?! It’s probably best left to the imagination, as in the movie, but the book form is pretty funny.

There’s no shortage of thrilling scenes in both formats as well because Weir and Scott do no scrimp on portraying the huge number of things that can go wrong, sometimes explosively wrong, while living in a place where sleepwalking out of doors is a real bad idea.

The Martian is a rare combination of odd but well written book that survives Hollywood intact enough to make an odd but well-made film.  As well, it’s a book written for adults, unlike the massively adapted Hunger Games, Harry Potter, and Divergent series.  Those were fun, but if you’re a grown up you’ll probably appreciate the differences. I can’t tell you which format would be better if you only had to choose just one, so I’m just going to say WATCH the movie and then settle in with the BOOK.  You will be happy you did.

NOTE: Ridley Scott has optioned the Silo Series, which begins with the book Wool. I don’t think I would have been excited at the prospect because that series will be super difficult to adapt, but after The Martian, I feel more trusting.