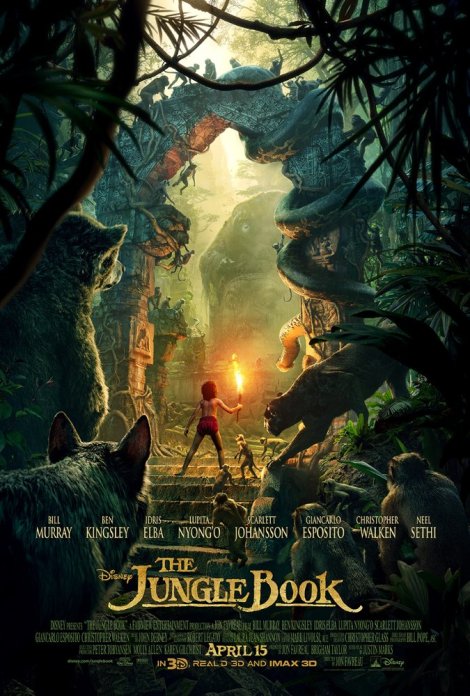 The beginning and the end of The Jungle Book are gorgeous and clever, which is fitting because the whole movie is a great time that will wow you with its technical brilliance. Beginning with a high energy sequence that shows off high quality animation that switches seamlessly from live action to mixed live and cgi to total cgi, the action flies at you and by you with a lot of camera movement, a lot, but even your perennially queasy reviewer got lost in the moment instead of looking around for a place to hurl. It was the best jump in computer generated movie making technology I remember seeing since being wowed at Shrek.  If you aren’t paying attention you won’t notice it switching, and if you’re young you don’t stand a chance of knowing it’s not all real.  It made me wonder what kids today think about it, and what they’ll think of it years from now when they show it to their kids.

And there were a lot of little kids there.  One, four feet away, narrated the whole thing to her dad until she fell asleep, which was a good thing because this is not a film for small children or sensitive ones.  There are a couple of nasty deaths, a thrilling chase sequence, and a scary nighttime scene during which I heard a small voice in the distance saying, “Mommy, I’m scared.”

Kaa (Scarlett Johansen, the one with the scary voice) gets short shift, but that leaves more time for Baloo (Bill Murray) and King Louie the Gigantopithecus (Christopher Walken) who sings to Mowgli.  Yeah, you should go just for that.  Mowgli is played by Neel Sethi, who looks an awful lot like the original Disney Mowgli and yes that was a little disconcerting.  But he’s a fine actor who makes it eerily easy to forget he’s working with animated co-stars. This is your grandchildren’s Roger Rabbit.

I haven’t seen the other Jungle Book since the 60s, but the current film’s story looked familiar, and I’ve never read the Mowgli stories (don’t shoot me), but a Wikipedia search tells me the original Disney movie was somewhat faithful to its prose roots with the exception of inserting King Louie into the mix.  Here Mowgli is happy with his wolf family and mentor Bagheera (Ben Kingsley) until the evil Shere Khan (Idris Elba) invades a water truce to lay down an ultimatum: give me the boy or you’ll be sorry. The boy goes off to the human village and has adventures along the way. So, pretty much the same story.

When the film isn’t scaring your kid’s pants off, it’s funny and energetic with a great hero story and lots of spectacular cgi.The Jungle Book isn’t afraid of telling hard truths (people die) and will probably make you tear up at the unsurprising (it’ Disney, come on) end.  This is a really fine movie and I recommend seeing it in the theater if you get a chance just for the large screen and more-awesome-than-home sound, but I think it’ll be even better on the small screen where the animated bits will blend even more.

THE JUNGLE BOOK – Bare Necessities (clip) (CFR: In Addition: Because everyone needs to hear this song at least once in their life. 🙂 )