Welcome to the first ever Electronic Gaming review here on CFR! 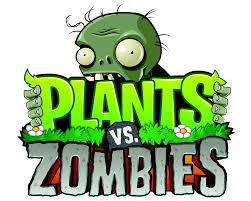 For Christmas a few years ago I got a cheapo PC computer game from my cousin.  I didn’t think much of it because the name was just dumb, but I was on vacation so I popped in the disk and loaded it anyway.

And spent the next twelve hours straight fighting cartoon zombies with peas and sunflowers.

This kind of game is termed “tower defense” because it involves placing defenses in the way of attackers invading your home space.  For Plants vs Zombie you’re given sunlight to grow plants on five rows (which feel like twenty five when it gets hectic), along which all manner of crazy zombie types will stumble on their way to your house. If they penetrate all the way by chewing through the plants flinging destructive peas and nettles and watermelons you get a green dripping message scored by a heart-rending scream, “The zombies ate your brains!”

At first you get easy to kill regular zombies.  It only takes a few hits to make them waver dramatically then faceplant on your lawn.  Once you get the hang of the basics: plant sunflowers, harvest their suns, strategically plant defensive foliage and keep your lawn safe, then it’s on to ever more impervious zombies and then ever more cleverly difficult areas of defense. Between levels they will send you ominous notes, like, “Hello, We are about to launch an all-out attack on your houze. Sincerely, the zombies.” At last you will find yourself on the roof, at night, facing Dr. Zomboss who will relentlessly place Football Zombies, Screen Door Zombies, Jack-in-the-Box Zombies, Buckethead Zombies, Zombonis (think hockey) and then the dreaded Gargantuar Zombies who swat your plants with either telephone poles or other zombies.  (Of course, a lot of the younger players may not even know what the heck a telephone pole is.)

Beyond the instantly obvious, blatant cuteness of all the graphics and sound effects there is a very balanced and deep game.  Zombie threat versus player strength, weapon plant types versus zombie strength, and very clever side games test your strategic acumen, nerve, and mousing abilities.

Humor abounds, with funny zombie deaths and clever easter eggs like typing in the word “daisies” (after you reach a certain level) and having a spray of daisies pop up whenever a zombie goes down.  It’s especially funny in one of the later levels where you might have a hundred varied zombies roaring onto your lawn at the same time.  Originally there was a Michael Jackson Thriller zombie that releases new zombies every time it goes up en pointe.  There was some push back from the Jackson family, and now that zombie is a generic disco king in a loud polyester shirt.

A huge extra for me was how easy it is to learn, but not super easy to play into the upper levels.  You don’t have to draw maps, take a college course on how to play, or have the dexterity of a teenage Houdini to mow down the comic undead.  I appreciate that.  I got a great deal of satisfaction at besting some levels that throw a lot at you and test your gaming abilities, without having to first undergo an extensive tutorial or spend a month learning the ropes.

I loved Plants vs Zombies and played it all the way through twice to earn the gold trophy not just the wimpy silver one.  Then they came out with a sequel, Plants vs Zombies: Garden Warfare.  Got internet?  (I don’t) Love to play games with hordes of pre-teen boys?  Knock yourself out.  Let me know how you liked it.  Oh yeah, and it costs twice as much.

There are now many ways you can play this originally loopy, fun game, all of them more serious and bigger and faster.  I’ve got it on my tablet and that version is, in a word, lame.  There’s not as much depth in the levels and few extras.  Between that and having to be on-line to really get into the newer versions I have abandoned Plants vs Zombies except to pop open my laptop now and then to slaughter Pogo Zombies and Zombie Yetis to my heart’s content.

Oh well, such is the way of the world.  I’m just happy they came out with the fantastic original game which entertained me for many hours, even after earning that gold trophy.  The original game (minus Michael Jackson) is still available, and it’s still cheap.  I recommend you try it.  I dare you to be able to play without laughing, and enjoy the End Credits Song.