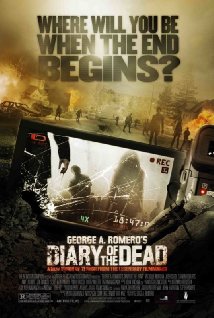 Diary of the Dead

I’m the person who liked this Romero film. It’s actually one of my favorites and YES, I did think the joke was funny.

Romero felt that rebooting the franchise, kinda sorta, would be a good idea after the fiasco that was Land of the Dead, and started the apocalypse all over again.  This time there are cell phones and The Internets and CCTV, and a slew of famous guest voices. Of course there is also a massively in-your-face social message that I try to overlook so it doesn’t overwhelm.  His standard bitchy, whiny guy is there, but he’s dropped a few years and is now pouty and cynical.  Still annoying, after all these years.  The core group is more modern, in that there are more victi….characters from the start and the women aren’t a bunch of fainting violets like Barbara.  There’s one Asian American and a short period with a group of African Americans, but for the most part the film is Caucasian.

The story begins in the woods at night, which should be enough to unnerve a lot of viewers right off the bat.  A group of graduate students is out filming a cheezy mummy movie for a class when things begin to sound weird on the news and they decide to call it a night.  I’ve always gotten a laugh out of the monster chosen by the filmmaker, because it’s obsolete and laughable, like zombies had become before their current renaissance. Society breaks down real damn fast, and before the RV is through its first tank of gas, they’ve lost some people and are outnumbered by zombies.

The entire movie is supposed to be video stitched together from sources all over the world, with the bulk of it shot by the erstwhile student director who sees his chance to document the end of the world.  He goes to ridiculous lengths to get the footage but it’s all in HD, goodie for us. As a counterweight to the pouty and disbelieving-no-matter-what guy, there is a lead woman who discourages the documentarian from his task.  I agree with her message of Jason being too involved in social media for his own good and the good of others, but I disagree that his efforts are a waste of time and energy.  The historian in me applauds his struggle to make a coherent record for those who come after. A Cinematic Bede, as it were.

Romero throws everything at the screen and some of it sticks really well.   It doesn’t have the mega money look of Land, and there’s essentially only one actor you’re going to recognize (or maybe not) so it has more the feel of his first zombie movie, which also had a documentary vibe with a strong social commentary and unknown actors.  It’s not his first, though, and there is a sense of the material being well-worn in spots.

The reason I like this one better than Land – a LOT better – is that Romero seems to be making more of an effort to return to his roots, to return to the monster he established as a cultural force around the world and make it speak to what’s important to us today.  A lot of people don’t think he managed it, but I enjoy the film and encourage you to continue your Dead odyssey with this film.  Once you watch the next, and last, Romero zombie film I assure you, you will be glad you watched Diary of the Dead.

DIARY OF THE DEAD – Trailer