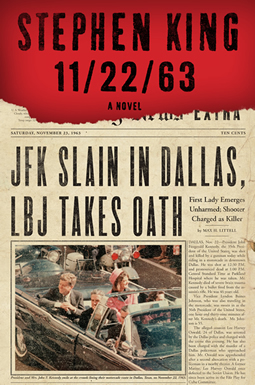 Way back when in the forgotten world of the pre-Internets, people could only buy books if they wanted to read a novel.  I used to buy Stephen King books because I liked the stories he told (mostly – he has some really annoying habits) and his writing style is entertaining to me.  Then he got rich and powerful and his work never saw a blue pencil.  Straight from typewriter to press they went, and the reader was left with shoulder issues after carrying a book around.  Between that and noticing I was reading about the same character over and over – Stephen King – I got tired of it all and left him.

Recently someone asked if I’d read 11/22/63, knowing that I love both true history and conspiracy (mmmmm conspiracies…like CANDY) so I hopped on over to the bookstore site and thought it sounded interesting.  I knew if I was ready for a bloated novel about Stephen King containing at least one scene that describes the embarrassingly revealed genitalia of some hapless woman, this would be the book to restart with.

Although the content is only marginally horror, King can always stand a little more discussion.  I’m sure most of you know the premise, that a thirty-something Maine English teacher decides to save the world by using a hidden time portal to go back in time to stop the Kennedy assassination.  The catch is, the portal only drops you in one time and place – Maine, in 1958.  In an epilogue, King says that he wrote the treatment for the thing (14 single-spaced pages) in 1972, but didn’t have the resources for needed massive research and felt that it was just too close to the event and so he shelved it for most of a half century.

The first two hundred pages are interesting and occasionally exciting, and the last two hundred pages the same.  The middle three hundred, however, was a real slog.  It was an important set up to the end, of course, but man that was difficult.  Right around page 550 I was ready to toss it. If you decide to read this, be ready with the coffee.

The end of the book was not exactly what I expected.  Some of it I had been predicting for about five hundred pages, and even though I knew the action surrounding the assassination would be tight, I was still impressed with that part.  Very tense.  Well done.  But then the denouement…  It was both what I expected and then a whole lot more.  Basically he took it a lot further than I thought he was going to, and the very, very end (after Jackson’s “end” of The Return of the King, it behooves one to say which ending you’re talking about) actually was very poignant.  I don’t remember ever feeling that with a King novel before, so bravo.

I actually find myself wishing they’d make a movie or mini-series from this.  (I have heard that Hulu is working on a project, with James Franco.) And it also makes me want to find my copy of It and read it again for the first time in years and years, because he spends some time in Derry, and that was one of my favorite parts.

So if you’re a Stephen King ex-pat, give this one a try, especially if you’re also a fan of assassination conspiracy web sites.