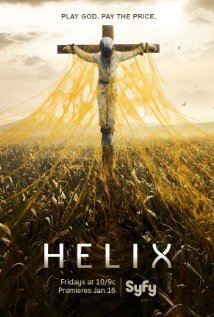 This isn’t going to be a typical CFR review because well, what I have to say about Helix isn’t typical.

Hubby and I watch this show every week. So yes obviously we like it. It has a variety of cool men and women; A little bit of racial diversity but very little so I hope that improves. Characters treat each others as equals – unless they are villains so of course that makes sense. It has good acting, its own visual style, and fun scripts. It also has one of the best theme songs ever!* What is really different about Helix is that it is a “mystery” show.  In other words, every episode leads you to uncovering the mystery in the story. Helix has several mysteries that are expertly intertwined.  The mystery begins with  a disease,  moves to immortality, and so far has ended with a powerful secret society. Sounds far fetched? Not the way the writers are handling it. (Hats off to them.)

Now normally TV shows centered around a mystery like this just annoy me. I find it hard to believe that a mystery can be sustained throughout a show. Yes Twin Peaks was amazing, but uh, eventually you had better solve Laura Palmer’s murder or: 1.) The law enforcement characters look like idiots; and 2.) It looks like writers have no idea what is really going on. (Yes I’m looking at you Lost.) Yet in Helix the mystery just keeps getting better! Yes there are several mysteries that are intertwined, so it gives the writers more room, but the mysteries seem to be well thought out by the writers. In other words, as the show progresses and character’s gain knowledge the mystery evolves too. So I never sit there and think “OMG what are the writers doing?” Instead I think “OMG could this show get more crazy and wow it all fits together! Why can’t I watch next week now!”

So people, give yourself a treat: Watch Helix. It is a fun mind-twister that Hubby and I look forward to watching every week.  I would get this show on DVD just to watch it all together and see more of the mystery unfold.

*Yes it is elevator music and it is PERFECT!