INTRODUCTION: In 1984 I tried to get people to see a movie with me called The Terminator. Not one of my friends would go. It seems they thought a movie with Arnold Schwarzenegger would just be too embarrassing to see. I knew the movie would be fun because the movie poster talked about the savior of the future and his mother. I thought there would be a cool female character. (I was right.) So I went alone.

I was one of five people in the theater – me and four guys sitting in the other side of the theater behind me. I sat down with my backpack filled with college books and my purse next to me. I there, in that movie theater, I watched The Terminator. I’m sure my mouth was open in awe and joy. I know I smiled a lot. I know I cheered. It was amazing. I can remember sitting in that theater and thinking “Yes! I love this! What a great female character!” It seems I was not alone. The movie made money and voila – several years later Terminator 2 came out and the lines “I’ll be back” and “Come with me if you want to live” became parts of our culture.

I will never forget that night in the movie theater. So let the very positive review begin.

OVERALL: It’s The Terminator. It is a great big YES!

POINTS: All of it. It was, mentioned in the introduction, it has shaped part of our culture.

PITFALLS: I need to see it again.

FEMALE CHARACTER(S): Sarah Connor. Icon. Goddess. Heroine to the Masses. Name sake for a TV series. Cultural Icon and Reference. Even has her own imdb page: Sarah Connor . Played by Linda Hamilton. I also love Sarah’s love of her roommate/buddy Ginger Ventruca played by Bess Motta. The two are exact opposites but totally love and compliement one another. You can imagine them living in a retirement home together causing trouble and taking names. Love it.

CULTURAL PITFALL(S): Well, other than the usual – more women, more PoC – I got no complaints.

2.) Heroes Come in All Shapes and Sizes. Sarah Connor is a very reluctant hero and Kyle Reese played by Michael Biehn, does not appear to us as an all powerful hero. He is smaller than the Terminator played by Arnold Schwarzenegger, and several of the things he and the Terminator machine do cause him pain. I think that makes the victory so much sweeter: Even the great machine can be beaten by human ingenuity.

3.) Cop Bromance. Lieutenant Ed Traxler and Detective Hal Vukovich played by Paul Winfield and Lance Henriksen is a beautiful thing to watch. The two have excellent commedic timing and play off each other well. There is a line about old coffee and a cigarette that makes me laugh every time. I could seriously watch a movie about those two.

4.) Passion. I would be remiss if I did not mention the passion between Sarah and Kyle. Sure it was forged in trauma and infatuation from Kyle’s part. But these two do make love you believe the passion and caring they have for each other. You want to see them happy together. It’s too bad there isn’t an alternate future where Sarah and Kyle raise John together. That would be great.

5.) James Cameron & Women Action Heroes. Hollywood seems to have a deeply ingrained sexist streak when it comes to movies about women, and, *gasp*, movies with women action heroes. Yet The Terminator proved this WRONG! I know people are thinking it was because of Schwarzenegger and maybe that is true. But the real reason people love The Terminiator is that is was a GREAT story with GREAT characters! That’s because director James Cameron loves her action heroines and loves to show them off. THANKS FOR THIS JAMES! So of course the movie rocked because Sarah got to grow into her own amd Reese got to show he was the action hero needed to protect her. Perfect.

BECHDEL TEST (Website): 2 of 3. OMG – I must disagree. I say 3 of 3 because Ginger and Sarah have conversations and enjoy each other’s company a  lot. 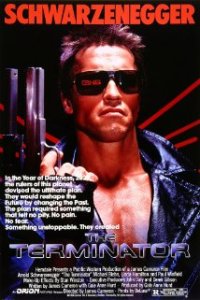 3 responses to “Movie Review: “The Terminator””