The below has been copied from The Mary Sue article.

As we’ve previously discussed, of the 100 highest-grossing films of 2013, a whopping 15 featured female protagonists. This figure became popular knowledge through a report by the Center for the Study of Women in Television and Film, which compares the percentage of women working behind the camera with those featured on screen. Unsurprisingly, the numbers correlate.

Vanity Fair’s Bruce Handy had some questions about those statistics. Given Hollywood’s focus on getting as many butts in seats as possible, surely they wouldn’t ignore the preferences of their audiences. Could it be that the lack of women on screen was actually reflective of a purchasing trend? If we treat blockbusters like Catching Fire as flukes, is there economic logic behind the comparative lack of female-led films?

In order to puzzle things out, Handy went in search of numbers to crunch. He broke down the top 100 films by the lead character’s gender, admitting that some of his choices were subjective. Identity Thief, for example, co-starred Melissa McCarthy and Jason Bateman. However, Handy reasoned, given that McCarthy was “the one audiences were coming to see,” he put that movie in the female column. To be thorough, he went outside the top 100 as well.

…just to be sure that box office wasn’t skewing the study’s results, that there wasn’t a huge cache of women-centered flops clustered below the top 100, I took a look at the next 50 films on Box Office Mojo’s grosses list; at that point, you’ve pretty much covered all the big studio films and many indies and are drilling down into documentary, foreign film, and re-release territory. Of those 50 films, I tallied 10 headed by actresses—a slightly higher percentage than in the top 100, but not dispositive—and 4 gender neutral.

Going back to the top 100, Handy compiled the grosses, and did some division.

This should go without saying, but the takeaway here is not that women-led movies are better than male-led movies. Gender disparity in media is an issue of balance, not of competition. Catching Fire, Frozen, and Gravity killed it last year, not in spite of being woman-led, but because they were good. I think that’s all your average moviegoer cares about. And maybe having female protagonists didn’t hurt. I think I speak for a lot of us here when I say we’re hungry for female protagonists. Ravenous, even. Perhaps we’re a little more willing to turn out in droves for something that’s only offered to us a fraction of the time. 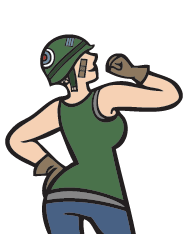