OVERALL: Whoa! It was a cool and unique experience.

POINTS: Independent filmmakers making it big. That is always nice. It is good to see a low budget movie make good. It is like a film Cinderella story and that is the best thing in my world view.

PITFALLS: Well, hmmm…. Can’t really think of any, but look in the Female Character part.

FEMALE CHARACTER(S): The director of this “Blair Witch documentary” is Heather Donahue and it is nice to have a woman director. Cool. But they she suffers from the typical woman in charge trope in that she is bossy, makes bad decisions, and is not liked by her crew. Plus the misogyny heaped upon her by fans of the movie got really old really quick. It would have been nice to have a good woman boss in movies. Hint, hint.

CULTURAL PITFALL(S):  This movie didn’t really scare me. *[SPOILER ALERT]* Mostly because I have lived in the country and have camped in remote sites with very experienced outdoors men and women. As I talked with other people I discovered this about this movie: If you were experienced with the great outdoors, The Blair Witch Project did not scare you. In fact you got annoyed at the characters for forgetting basic outside survival skills. Such as marking your trail, bringing a compass, and perhaps carrying a gun. As one friend said “Those of us who camp know that if something is banging on a tent in the middle of the night, you take off your shoe and hit it back because it is a raccoon.” Yup. Pretty much. Also when you hear screaming in the middle of the night, that’s deer, ok, no humans or ghosts. My father, a man who has hunted, lived in rural areas, and done rough camping all of his life thought the characters deserved to die for being so stupid.

Now city people, people who have never camped or spent a lot of time outside, were terrified of the movie. Probably because they, like the characters, had no idea what was happening around them or how to survive. Non-campers would not know what was happening in their surroundings or how to get out of it. Hence, their terror. This makes me think that the people making the movie didn’t know much about wilderness survival either.  END *[SPOILER ALERT]

Oh and then there’s the whole “witches are bad” idiocy, but I’ve already written about that for the week.

HIGH POINT(S): Huzzah to an independent movie making it so big. 🙂 Also started the “shaky camera syndrome” which can be good or bad depending on your inner ear health. 🙂

BECHDEL TEST (Website): Wow! The movie passes 3 of 3!!! I would not have expected it.

DVD/BLU-RAY WORTHY:  Yup. This is worth owning – and it made movie making history. 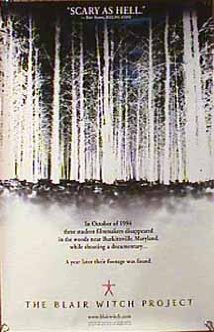 One response to “Movie Review: “The Blair Witch Project””