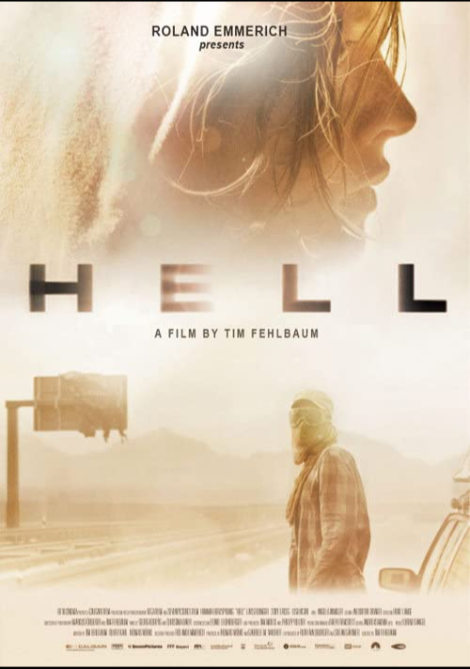 Now and then I neglect my Netflix queue a little too long and something shows up in my mailbox I don’t remember adding. (Yeah, I’ll get streaming if the internets ever get to my neighborhood.) I think I may have thought this was a zombie movie back when. This German film has a lot of the hallmarks of a good zombie flick, and some borrowing from other works. One of the things I’ve enjoyed about the zombie craze is how it has upped the game on other apocalypse fictions. This movie gets a lot right and the makers have turned out a decent thriller.

In Hell, the world’s atmosphere heats up 10°c in four years, which will melt the paint off your house and wilt your petunias. It also dries everything up so much that searching for water while staying out of the sun will become your new full time job. A woman and her younger sister have thrown in with the boyfriend, who has a car, a little bit of gas and a narcissistic OCD streak that doesn’t fit in well with the current atmospheric and social environment. They’ve heard about a place that still has water and are working their way into the mountains to find it.

I highly recommend watching this with the subtitles on, because the dubbed version is horrible. The attention to detail making the world in Hell seem hot and dusty and unpleasant, though, is first rate. All the outside scenes are color timed much as Pitch Black was, with a slight yellow cast that nearly makes you want to put on a pair of sunglasses to watch the movie. I don’t know if they’re added digitally in post, but there are always dust motes. I went through three glasses of water it made me so thirsty. One sequence takes place in what looks like an actual burnt forest. Everything looks perfect throughout the film.

Like any good zombie film, there is a mall scene. Well, a mini-mall. Actually, a gas station shop, but it works for me. They use black out covers on the car as they drive during the super-hot days, like the vampire movie Near Dark. There’s also clear use of a large plot point from The Walking Dead that I won’t describe because it’s a huge spoiler. Normally these kinds of appropriations really irritate me, but they’re so well done here I didn’t mind.

One of my favorite things about the film is the strength and resilience shown by the female leads, Hannah Herzsprung and Lisa Vicari. Even though Hanna’s character Marie is too easily pushed around by her boyfriend, when the excrement hits the rotator she gets tough. The little sister isn’t a bruiser, but a brainiac who also works with her strengths when needed.

Everything works very well in this movie, from acting to plot to the overall look. It’s a solid thriller that I recommend you watch if you don’t mind apocalypse fiction that requires good subtitle reading skills.

CFR: In Addition: OMG. If you look at IMDB Trivia on this movie it says: The title ‘Hell’ is the German word for ‘bright’.” OMG! That so changes the movie as if it were called bright for American audiences we might not be as terrified when we went into the movie. Also to me shows the difference in the movie posters. The one below shows hardcore survival in my mind. The one above, is sadder and bleak.

If a movie is called Hell, and it isn’t about kicking demon backside, then I know it will be sad.

I’m glad this movie was good. I’m glad Mildred watched and reviewed it. I for one can’t really handle post apocalyptic movies, but I’m glad this one stood out.