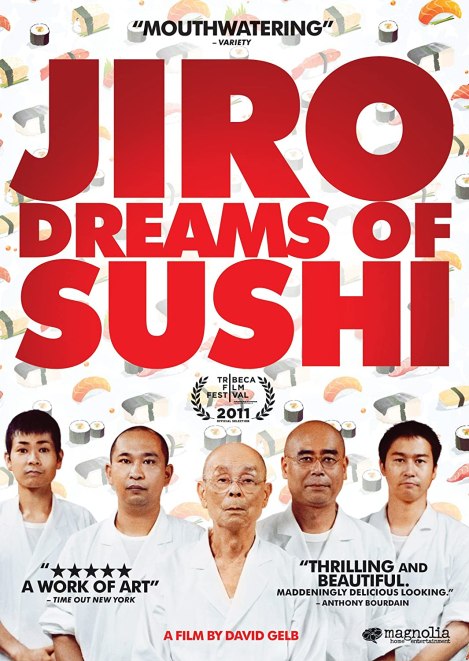 As a Midwesterner I’ve not often been in a position to eat sushi, but I have tried it. It didn’t wow me, but it was better than some old fashioned “down home” meals that made me want to run to the bathroom and rinse out my mouth. In a high end sushi establishment, as well, there is a large amount of protocol that I’m not used to, since I’m more familiar with a plate balanced on my lap on the couch, not always of the ceramic kind. Everything about Jiro and his restaurant is a totally foreign experience for me, so this documentary was like travelling at warp speed to the Delta quadrant.

As tends to be the case in Japanese society, there is a distinct sense of class in Jiro’s sushi empire. He and his cohort make no secret of their disdain for people who eat “lesser food” in a social setting instead of focusing on the exacting protocol and the reason for being in his restaurant. The reason is to sit and savor three hundred and fifty dollars of raw seafood with a dollop of rice for fifteen minutes and then get out. If you want to come back, make another appointment and wait a month or so. If that seems like a lot to spend on ten or so bites of uncooked fish, consider that the highest price paid for a single tuna was over three million dollars, or about five thousand dollars a pound.

Technically, the documentary is solid and artistic when needed. The opening credits play over a series of dreamlike movements, deliberate and precise like the high end crafting of food as Jiro unlocks his restaurant at the start of a day. He then describes how he actually dreams about making sushi, and explains that you must love your job more than anything else. That was where he lost me, right at the start. That sentiment is fine for people who have the luxury of choosing a career rather than being stuck in a job, which is where nearly every person on Earth resides. Completely disagreeing with Jiro’s fundamental beliefs didn’t make the film any less fascinating. He is eighty five years old at the time it was made, and still working the front counter and controlling the massive amount of work required to place world class food on the shiny black lacquer plate a bite at a time. When we follow Jiro outside the work environment we discover he actually can laugh and smile, and is still bitter about his parents nearly eight decades later.

There doesn’t seem to be any aspect of this restaurant that is not explored in the documentary, from customers to buying the seafood to prep, and examining this most unlikely example of a Michelin three star restaurant. Not only does it only seat ten people at a maximum, but there is no restroom inside. Patrons must go out the door and use one of the subway’s nearby facilities if they wish. The film crew, which was often the director with a tiny hand held camera squeezed into a corner, was unobtrusive and very good at catching just the right angle to show how things were done. No one seemed self-conscious about being filmed, and there was a real feeling of depth to the exploration of this world.

Something that really bothered me was the utter lack of women. Anywhere. There were no women customers, no women cooks, not even women office workers. When Jiro’s son went to the tuna auction there was not one woman in sight, even as he walked through the huge fish market. Near the end there was a family get together and a special tasting at the restaurant with two women in attendance. They even got to speak to him. I don’t think he looked at them as he answered, but that could be a Japanese cook thing, I don’t know.

As documentaries go, this is a first rate film and I absolutely recommend watching it if you are the least bit interested in food, world class craftsmanship or what it takes to become a walking national treasure. Like me, you may not agree with Jiro’s philosophies, and be irritated by the nearly all male cast of characters, but I think you will find this a fine and thorough examination of a fascinating world.

CFR: In Addition: I love Mildred’s writing. It makes me laugh and it is so good. Like sushi. I LOVE sushi! Watching the trailer made me drool. I’m ready to go to Japan and sit in that subway station until I get to try some of that glorious sushi. I’ll eat some for Mildred.

One response to “Monday With Mildred: “Jiro Dreams of Sushi””