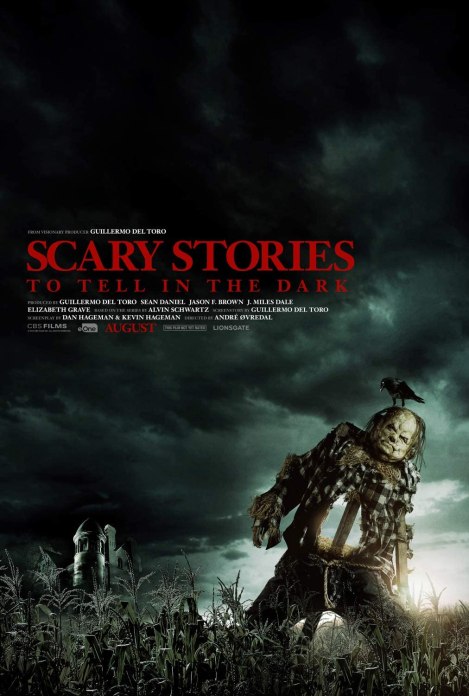 Scary Stories to Tell in the Dark

Teenagers versus a super scary supernatural horror. Yeah, we’ve seen this scenario once or twice over the years. Of course the victims…er…characters are all interesting and appealing in some way, and three of them are really close friends who meet the fourth in a chilling sequence featuring a Henry Bowers kid, only more strung out and crazier seeming than Stephen King’s It bad boy.

Based on a series of children’s stories with some truly disturbing illustrations, this film is produced by one of the leading horror director/producers of the era. You know, going in, that a film is going to be visually gorgeous with Guillermo del Toro in the mix. The art work in the haunted house is especially great, but all the sets are absolutely perfect. Camera work is also right on, and costuming and the cars are stunning. The film is set in 1968, an unsettled era when America was sending teenagers overseas to wade through swamps, kill people, bathe in noxious chemicals dropped from the sky and get hooked on some very good drugs. There were some really nifty cars in that year, and being a bit of a geek I appreciated all of them, even the old bus at the induction center.

Best of all were the many nods to one of the most famous movies released that year. Night of the Living Dead is a great cinematic shorthand for “late sixties”, and a classic horror film that begins the set up for scares early and often. Scary Stories is set in George Romeo’s state of Pennsylvania, where the director set many of his movies. One of the characters is handed a flyer for a big party with an ad for Night at the bottom. Of course I noticed that right off since it’s one my favorite of all time movies. At the drive-in that night of course that’s the movie playing, totally out of sequence. Why do they always do that? There’s a quick scene later with police officers searching fields with over eager K-9s straining at the leash, which is another visual nod to Romero, but my favorite thing was the opening scenes playing over the song Season of the Witch, which is an obscure early Romero film. That really tickled my geek.

Music for a film set in 1968 was pretty tame except for the opening number, until someone opened a music box and The Hearse Song began to play. I recognized the tune but only knew the famous refrain, “the worms crawl in, the worms crawl out”, and then I Googled the song and the words are even more gruesome than that. What an awesome piece of work!

Normally in this kind of film the bad kids the obnoxious characters, the ones only in the story so that viewers can hate them and revel in their horrible and much deserved death are mostly the ones getting memorably offed. Here, with one exception, the bad things that happen are to kids you don’t want to see suffer. That’s one way to increase the creepy tension in the drawn out action scenes. When monsters show up the action is slow and deliberately paced, giving you plenty of time to worry about the nice kid in a bad spot and every time the filmmakers give you a hint that they can somehow escape their horrible fate. It’s cruel and makes for a really fun scary movie. The monsters themselves are all terribly cool and diverse.

“Stories hurt. Stories heal. If we repeat them often enough they become real. They have that power.” All of that happens in this solid horror film with a tried and true story line. Everything is really well done, from acting to cinematography, nostalgic nods and gorgeous scary monsters. If you’re in the mood for a fun and pretty scare, definitely see this film.

SCARY STORIES TO TELL IN THE DARK – Official Trailer – HD

For your listening pleasure, The Hearse Song, complete with lyrics.

CFR: In Addition: Wait what?!?!?! Guillermo del Toro  is attached to this movie? After reading this supportive review and seeing his name, I might just watch this. Thanks Mildred!