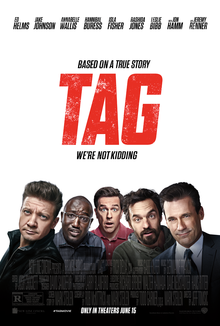 Some people are lucky enough to find a friendship that lasts a lifetime. I’ve never experienced that, but my grandmother did and I remember their closeness, how they just really got each other. I also remember how heartbroken her friend was when my grandmother died. Imagine how incredible it would be if you had several friends who touched your soul so closely for all your life. Pretty incredible. This is what makes the movie Tag so much fun to watch. Not only is it a great comedy, but there are a lot of deep and comforting feels to be had along the way, made even better by the fact the movie is based on real life events.

Years ago, a group of school buddies began playing a game of tag. They went through school, went out into the world, became adults, got married – always playing their game of tag. They were relentlessly competitive, lovingly trying to crush each other with furtiveness, subterfuge, and all out physical aggression. After many years, their story was reported in the Wall Street Journal, and then a movie was made. For a Hollywood film, it’s pretty amazing how much of their real story made it into the film.

As you might imagine, there is great chemistry between the friends, each of them played to perfection by actors who have great chemistry with each other. It’s grounding to have five characters who, while being super close emotionally, couldn’t be more different. Each has a sharply defined personality that both aids the narrative and ups the emotional ante. The movie’s framing story is that the group finally decides to call it quits, but first, Hoagy talks the others into one more chance at taking down Jerry, who has never been tagged in all the years. Ever. Hoagy has to find and tag the others to talk them into trying one last time. Slowly but surely they’re brought around to the hope that maybe This Time someone will get the better of the legend. Tagging along (hey, why wouldn’t I do that) is a Wall Street Journal reporter who begins to see the possibility of a great story, not to mention the competition gets into her head. Something I really loved about Tag is that the men never give the reporter a hard time for being female and in their game, though a no girls rule is in the official charter. One of the wives plays, unofficially, as well.  It was wonderful to see Hollywood showing the no girls policy not surviving their childhood. It gives you hope that boys can grow into men.

All the action is very well done, and often hilarious. The humor weaves between situational comedy and slapstick. The music lends its weight to the comedy at times, especially “Colors”, which is a soundtrack song about tough LA gangs. It pairs hilariously with a bunch of klutsy middle aged men playing no-rules tag. For the enjoyable end credits, there is the Mmm Mmm Mmm Mmm song.

I had thought from seeing the trailer for Tag that it was a bit of preposterous fluff, but now I’m very happy to have watched it. I recommend this if you would like to see a serious movie about deep, lifelong friendship played out on the most ridiculous stage.

CFR: In Addition: Wow Mildred! You sold me! I’m glad that there was depth to this movie. I thought so and I am glad to know. I also like the fact that Jeremy Renner – Hawkeye from Avengers! – is a master player. Of course he is. 🙂