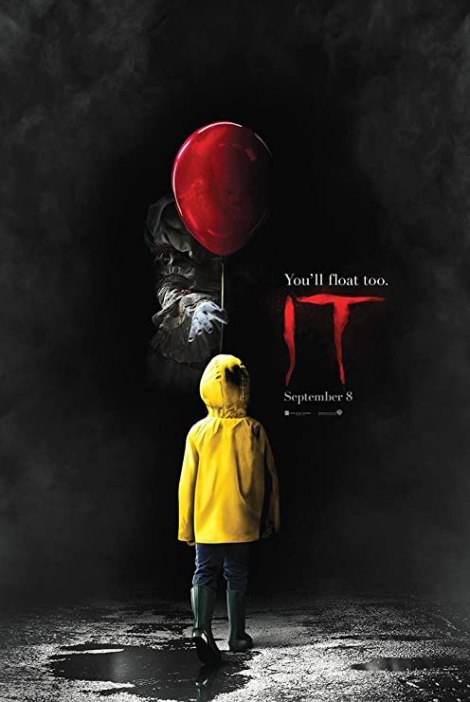 One of the most difficult of books or movies to talk about is It. Distinguishing the title from a common pronoun is tricky and can make you sound a little daffy but here I go anyway. It is one of Stephen King’s early works, about the time it became verboten to edit him so it’s a really long novel. That’s why I bought it that sunny day at the Aloha Bowl Swap Meet in Honolulu. I hate shopping, and if I had a reason to go hide in a shady corner to read I was allowed to leave the group and stop shopping. It didn’t matter to me if the book was good or not. It was long. But, it didn’t take long to get caught up in the truly interesting story of a bunch of kids in a dangerously haunted town in 1950s Maine. It was released as a four hour mini-series in 1992, and it was pretty good except for the atrocious end, which was too much to depict in the early days of digital effects.

King has a field day offing more than a couple of children, beginning in the first couple of pages. He’s the only author I can think of who gets away with this consistently, beginning decades ago. It is the story of a terrible entity that typically assumes the aspect of a painted clown called Pennywise, who terrifies then horribly kills children, and controls the adults enough to keep them from interfering. A group of “losers”, which is what they call themselves, bands together over a long, dangerous summer. The second half of the book is the kids, now adults, coming back to town. The movies follow the same formula, with the first one being the kids’ story and the second one about the adults with occasional flashbacks. Both are directed by the same person, making everything look the same, but the writing staff changes some between the two. This is a crucial difference because the first film is crap, with too much left out of King’s book, and the second movie is much improved because it uses more of King’s book. It’s a simple thing, but apparently too much to understand for the typical Hollywood filmmaker.

The awful first movie changes nearly everything that was good about the origin piece. Like the mini-series, they did manage to choose a great bunch of actors for all the roles, especially Bev, the only girl in the group. I thought it would have been cool if the second film could have been made with the original child actors, now grown into the correct age for the adult roles, but the actors were all perfect so no harm done.

The graphics are outstanding, and I was happy with them technically. I’ve said since the first time I suffered through watching the end of It in 1992 that all anyone needed for a great adaptation was to go back and slap some modern special effects on the giant spider that looks completely ridiculous in the mini-series. But a good movie is not made with digital glitz alone. Pennywise is the biggest change from the mini-series, partly because of the enormous gains in cgi. Tim Curry, the original Pennywise, had to BE scary all by himself, and he was, without mugging or being enhanced with special effects. The updated Pennywise is played by an unrecognizable Bill Skarsgard, whose face is often “enhanced”, and who plays “scary” by tilting his face down and staring up at you. Oooh. I was so scared. Not. Tim Curry used all his acting tools, including his voice and body language and damn he was scary.

The makers of the first It made some weird choices in what to keep and what not to keep, like changing the music the mom plays on the piano as little Georgie goes off to his doom. Für Elise is still taught in music classes everywhere, so it would be recognizable to most people, and it has the perfect melancholy quality needed for the beginning of the horrors.  Why was this changed to a more modern tune? Something without the same emotional heft? Overall, the musical themes are reminiscent of Lord of the Ring, with the addition of the now standard “oooh, you’re all gonna die” sound. 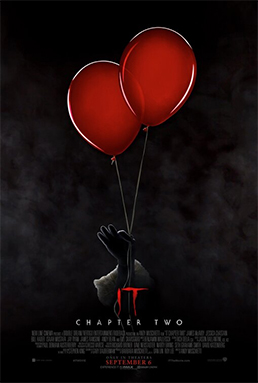 There are too many differences in the first movie, and not many dropped in the second one. No one tells Richie “beep beep” until Pennywise says it, which he does because Richie hates people shutting him up that way and Pennywise is all about the screwing with peoples’ feelings. Plus, the words are totally out of context making the sentiment completely wasted. There was so much misguided loss of original material in the first film that even thirty years after reading the book I was irritated. More original material is used in the second film, but even then some crucial stuff is missing, typically for no good reason. For example, Eddie doesn’t scream, “This is battery acid!” In the book it’s a wonderful consolidation of Eddie’s story, his greatest fear, and a truly heroic and brilliant gesture. And really, shouldn’t we encourage King to be more succinct by using his ideas when he includes a great and deep shortcut?

Beyond the smaller amount of changes, the second movie also seems to better capture the feel of the original book, including a deeper demonstration of character motivations and histories. If there is a universal truth, it is that Stephen King sucks at ending stories and everyone knows it. Even him. It becomes a running joke in the second movie, with nearly every character taking a swipe at Bill’s famously bad book and movie endings. Even Stephen King himself in a cameo that puts Jordy Verrill to shame takes a poke at Bill – who is obviously King’s Mary Sue – being a writer who can’t carry the end of a work. It’s funny, and a great inside joke, but also gives the viewer a lot of information about the character and how the world treats him.

Because most adaptations of Stephen Kings’ books are not very good I wasn’t surprised the first of the two movies was cruddy, but I was surprised at just how bad it was. It was so bad I nearly didn’t watch the second film, which would have been a mistake because it was a far superior work, though it followed the theme. The book’s ending was weak, the mini-series ending was embarrassingly bad, and the end of the second movie is a hot mess. The first It was a huge success at the box office and I can’t figure out why, so there’s a good chance you’ll like it, but don’t say I didn’t warn you. The second film is a solid horror flick where everything works fine except for a typical Stephen King-style end.

CFR: In Addition: My husband can imitate Time Curry’s (Tim Curry – IMDB) Pennywise voice so perfectly, you would think he was standing in the room with you. My good friend Rene had a movie Pennywise costume made that is perfect. One day the two will go out in public together. It will terrifying people. Heh, heh.