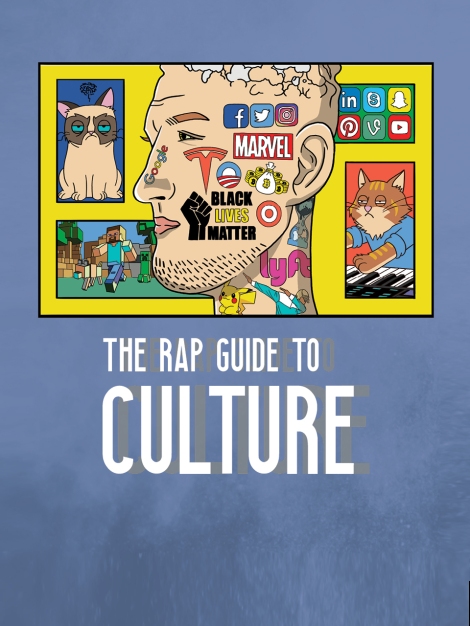 The Rap Guide to Culture

Sitting in the darkened Bloomington Playwright Project’s Ted Jones Playhouse, we were waiting with about a hundred other people in the small space to see Baba Brinkman’s The Rap Guide to Culture. One has certain expectations when going to see someone rap for an hour and a half. My first expectation is that I will probably fall asleep from boredom, as this musical form is favored by me well down near the country music category. I own six country songs. You do the math. The next expectation was blown when a man sprang onto the stage and strode up to the mike. He’s middle aged, and very Caucasian. A young man behind me muttered, not very softly, “Oh, this is ridiculous.” I thought he might make a break for it.  And then Baba began to rap.

He moves like any hip hop singer you’ve ever seen. His hand doesn’t stay rooted in his crotch, but other hand gestures and slight dance moves look really familiar, even to me. Baba’s voice is pleasant and always on key, but what really blew my mind, beyond the subject matter, was that I could understand every single word he sang. Even when he was blowing through the science at warp speed, I never felt like I was falling behind in his logical progression. Baba leads his audience on a distinct path of logic, though it might take a while to catch on that he’s going somewhere with a story that begins with the first spasms of life on Earth and uses the history of hip hop to explain…us. Don’t worry, if you see it, you’ll get it.

The unorthodox trail isn’t surprising once you learn that his master’s thesis at Simon Fraser University explored the obvious link between Chaucer and hip hop. He is the world’s only peer reviewed rapper, with a bibliography. I’ve seen two of his stages, one for The Rap Guide to Consciousness, full of awesomely animated three foot synapses and a huge screen to show graphics and equations. (Yes, I said equations. This is science rap y’all!) The stage for The Rap Guide to Culture was more understated, with brick walls tagged with graffiti like Equality/Equity and Shibboleth. It took a bit to realize that all the graffiti were bullet points for his class, and yeah, we did a call and response to shibboleth during his amazing free style rap based on audience suggestions.

He drops research nuggets at a faster rate than a sycophant drops names, from a wide ranging swath of deep study filtered through a brilliant and bizarre mind. His graphics are straightforward and range from simple EZ CorelDRAW animations to a dazzling pixilated masterpiece of the brain. There is no fat to cut from any aspect of his show. Everything is tight and always totally on topic, even when it’s not immediately obvious.

We saw both of the above mentioned Rap Guides, but he also does The Rap Guide to Religion, to Medicine, to Business, to The Wilderness, to Climate Chaos, and to Evolution. I found Culture to be very entertaining and educational, but I thought Consciousness was all that with a slightly stronger plotline.

If you’re into science, twisty logic trails and really good hip hop, this is a guy you really need to see.  Baba travels a lot and has a small on-line presence so there’s always a chance you could catch his show somewhere near you. He gets my highest recommendation. Don’t let the dorky video I linked to throw you, he’s fantastic in person. And I might buy a hip hop song. He may have changed my life.