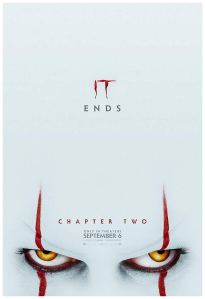 OVERALL: Good movie and not what I expected. A character driven horror show where character growth and self-actualization was key to defeating the monster. I like that in a story and I did enjoy this. Yes, go see it. It is quite the experience.

POINTS: This is a beautiful, character driven movie. The colors and lighting, costumes, set, are all magnificent. This movie should get some Oscar nominations for all levels of production design. Well done!

The acting is very good good too. I loved how the adult and child characters both held the screen. The movie gave you a strong sense of the child still being inside the adults. Very real.

In short, this movie holds together very well and transports you into childhood terrors that are oh so real. That includes having real life sadistic bullies come back to harm you. That is very terrifying. This movie reminds me why childhood can be horrible and I am glad I am an adult.

PITFALLS: First: If you love Pennywise, then prepare for less of him in this one. Though when he is on the screen he is all there and is even more the terrifying chameleon that you just want to smack. Plus hooray, he doesn’t drool as much so that kept me from wanting to hand the screen a napkin all the time.

Let me begin by saying I am very easily scared. I then become very easily angered. When I watch horror movies, I tend to want to scream and then fight.

So when a group of adults go at night into underground tunnels and sewers to battle and alien/monster my first thought is “Where the heck are your guns?!?!” Plus some dynamite, gasoline, lighters would be good. The IT heroes are going after a physical, tangible entity so for goodness said bring some firepower and bring that thing down! I guess this is just another movie clip I will need to make in the “If Our Heroes Had the Proper Tools” movies.

FEMALE CHARACTER(S): I like knowing that Stephen King loathes abusers. Well done, sir and I must agree.

However our one heroine, Beverly (aka Jessica Chastain woot!) has a character arc of going from abusive father to abusive husband to nice guy in the end. Now that’s great cause go Beverly! However, I just wish her true moment of power had come from understanding herself, not understanding that someone else wrote her love letter. Don’t get me wrong, it is nice, but I just wanted more.

CULTURAL PITFALL(S):  First: See Female Characters above – which is more of a meh thought.

Second: Fat Shaming: Ok, really? Really? Look I’m fat. Have been all my life. I’m big and designed that way. It’s like having brown hair and blue eyes. So trust me when I say that making fat something that makes a character less desirable or bad or other is beyond nasty. It is downright bullying behavior and we should be beyond that now. Having a starring character get thin so now he can be more desirable to another character and then insulting a fat wife, well, no. We can do better than that so do.

AND if you think that giving dieting advice is helpful go do some soul searching and just keep your mouth shut.

Third: Why does the African American character have to have the hardest time IMHO? I was so upset for character Mike in both movies. He has it a bit harder due to being black in a predominantly white town. Plus he stays to watch over Derry and remember. I just REALLY want a super happy ending for him cause I think he did the hardest work and seemed to get the least reward in his life, if any at all. Plus I wanted his rich friends to offer to help him out financially.

HIGH POINT(S): The beautiful crafting of this movie AND character driven story. Well done. Seriously. Go see it. IT is an experience!

BECHDEL TEST (Website): 3 of 3. Whoa! But yeah it happened and cool.

For horror movies only: HUBBY’S HORROR RATING. Hubby give is two painful squeezes and 4.5 paw prints. He really liked it and agreed about character development.