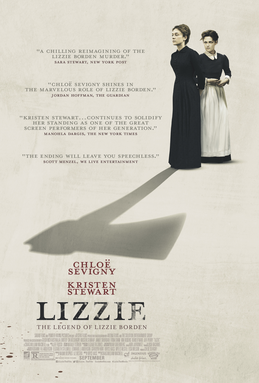 True crime has fascinated me for a long time. The first time I read about Lizzy Borden was in middle school, shortly after I heard that awful little poem:

and gave her mother forty whacks

when she saw what she had done

she gave her father forty one

There are a lot of theories about what actually happened that day because, technically, they never caught the murderer.  Lizzie Borden was found not guilty of the crimes and lived another thirty years in the same town. She never publically admitted to her guilt, but boy oh boy did she ever do it. That’s not just my opinion. That long ago book was filled with a lot of speculation about who might have done it, since Lizzie was “innocent of the crimes”. There were a couple of gory, fuzzy, black and white photographs that as a kid I was glad they weren’t very clear. Lizzie really did a number on her parents. The first book went with the Victorian theory that of course she didn’t do it because she was both rich and a woman. Years later I read Lizzie Borden: A Case Book of Family and Crime in the 1890s (partly because it was written by one of my professors). This straightforward version simply stated what Victorian life was like for women, how the police investigated, laid out the basics of the suspects, and provided a large chunk of the courtroom transcript. What is striking about the Lizzie Borden case is how thoroughly it was investigated at the time. We actually know a lot about what happened that day, compared to other famous murders of the time. With a modern forensic and profiling reading, without the Victorian misogyny clouding our judgment, it’s easy to see Lizzie got away with it.

There has been an opera, many books, and several movies on the subject. I have been partial to the Elizabeth Montgomery version, in which she strips down naked to wreak havoc in the house. It’s an interesting idea, but I don’t think she did that. Blood splatter forensics was a hundred years away so why would she go to the trouble when she could just burn the dress? Which she did. This latest version, a vanity piece from star, producer and showrunner Chloë Sevigny, makes a point of using a very large amount of evidence from the courtroom transcript, making it essentially Lizzie’s version. The take is modern in that it doesn’t shy away from the questions of possible sexual abuse by Andrew Borden and a lesbian relationship between Lizzie and the maid, Bridget Sullivan. They also cling to the modern idea of Lizzie meticulously planning the crime with an idea of thwarting the police investigation. This doesn’t work for me, because investigations of the day were a joke, so why go to that much trouble. The tone is modern in its sympathy to a woman who many have been pushed too far, with hints that she was trying to not only survive in a hostile environment, but even trying to escape being institutionalized for basically being unmarried and headstrong.

Sevigny’s Lizzie is mostly quiet though not a doormat to Andrew’s overbearing attitude. When it comes time to wield the axe, she’s absolutely believable.  It’s a beautifully understated performance and I think completely spot on. Kristen Stewart plays the maid Bridget, and spends most of the movie crying, wincing and generally suffering. Her Irish accent is awesome. With the strong supporting cast, the viewer is drawn more fully into the slowly building story. Everything seems eminently believable, and sad both for the murder victims and the woman pushed to that point. The art direction and costuming is great, giving us a good glimpse at what things really looked like in that period. The sound is at times creepy, giving the house a lot more character with the constant creaking, and truly horrible during the murders. There is a ton of historically accurate details, from the rendering of how the bodies looked when they were found, to the telling blood splatter on the wall over Andrew’s body. They took huge liberties with Andrew’s murder, I felt, and the blood on the wall was just one bit of evidence to that.

This is a really good movie, though it may be too slow and quiet for a lot of people. It deals with a hundred and twenty year old murder in a very modern way, which is good for helping to understand motivation and forensics, but which leads the filmmakers to take some liberties with the story. But it’s a movie, of course that’s going to happen, so it didn’t bother me. If you’re interested in true crime in a very well presented Victorian setting, watch this film.