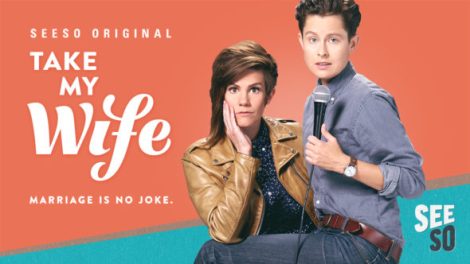 Or, “Marriage is no joke”, if you are two women married to each other and stand-up comics who seem to spend every waking moment together. I had only been vaguely aware of Cameron Esposito, a famously gay comic, having probably caught her short routine on some late night show. She’s funny, in a typical American Stand-Up sort of way, with her particular shtick being an emphasis on being gay. A few years back she met and then married fellow comic Rhea Butcher, who is also very funny and who I had never heard of, with a different emphasis. They are non-binary, and talks about how butch they are, how often they’re mistaken for a teenage boy (some of their funniest stuff, I think), and a recurring – unfortunate – joke about Indiana being “the thinking man’s Ohio”. That one I do not like. They also describe themself as a queer spiritualist.

For two seasons the two created and starred in a tv show on the extremely short lived subscription streaming service called Seeso. When it went out of business, all the shows it had been creating also went by the wayside, including Take My Wife.  That’s a shame, I think, because while it’s not generally a falling down funny show, it is entertaining. More importantly, it’s one more chink out of the wall holding back gay and lesbian fiction in the mainstream. In interviews, they both made sure to promise that no lesbians would die on their show, which is something that almost always happens in the mainstream. That they would have to even make that promise tells you a lot about the state of mainstream fiction.

There are a lot of interesting supporting characters, most of whom are real-life comics as well. My favorite is their neighbor, Frances, who creates art out of items scrounged from garbage cans and delivers sound life coaching to the new couple.

The two were already married while making the show, which is vaguely biographical, and is an interesting look at behind the scenes of stand-up comedy. Unfortunately, they separated a couple of months ago, which wasn’t surprising to me. How in the world can two people work and live together? They were doomed from the start. I hope they manage to work through their problems, though, because I think they’re both very funny and I hope they can go on to create more humor that is very different from what we’re used to seeing.

Take My Wife is funny, different, and groundbreaking, and I recommend it if you’re looking for something fun to watch on your tablet at lunch. It’s shows like this and One Mississippi that give me hope for a future of inclusion in fiction, because the more often we get work from creators outside the mainstream, the better it is for us the viewers.

One response to “Horrorible Review: “Take My Wife””