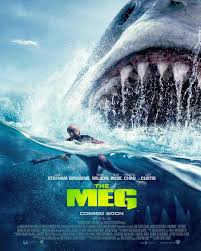 I don’t normally watch movies about gigantic, antique sharks so I can’t say I’m an expert, but I enjoyed The Meg well enough. Critics were fairly harsh on it before opening weekend, where it did really well and now they all love it. Go figure.

I’m not going to go into the whole science thing because that’s just a cheap, trollish shot. It’s called science FICTION. I figure as long as it isn’t as egregiously bad as Armageddon, or Gravity, to the point of yanking you out of the movie, then just go with it. The Meg is a fun romp with some sexy actors in fun settings, and what more can you ask of a summer creature feature? One of the nice things about this millennia is that you find a more diverse cast more and more often. Cast AND crew, most of the time. I last saw Bing Bing Li (or is it Li Bing Bing – depends where you’re looking) in Detective Dee and the Mystery of the Phantom Flame where she plays cute but tough, and she’s believably heroic here as well. She’s also only a couple of years younger than Jason Statham, who plays his typical heroe role, sans fists.  They’re the romantic interest every Hollywood movie is required by law to have, and while Statham has the uncanny ability to make believable goo goo eyes at every woman he’s pared with, Bing Bing struggled a little. Maybe it’s because he’s not aging as well as her. Don’t get me wrong, I like him, but he had much better chemistry with the kid playing her daughter. Ruby Rose seems to be a breakout actress and that makes me happy. Here she’s sporting an extreme anime look that suits her. I don’t get how she can look so different every time you see her, with hair that short.

Something that struck me right away was just how awesome the 3D rendering is in this movie. To date The Martian was my gold standard, but this was hands down the best yet. Not only is the cinematography beautiful, but every set, every scene was crafted with deep, deep 3D in mind and I loved it. I also loved their homage to the old “throw or shove something at the audience to make their heads snap back”. We all did, and it made me laugh out loud it was so well done. As there doesn’t seem to be a technical term for that already, I’m calling it the 3D Wilhelm Scream.

The cgi shark isn’t the best ever. I’d rate it a little better than something you’d see in an early 2000s game. It’ll look fine on your tv.

Like the source book, the action sequences go a little long, and there were a few super predictable spots as opposed to the more average predictable spots. There were a couple of scenes that will irritate you for the ham handed set up, like yelling at the person in the shark cage that the shark is getting closer – IT’S GETTING CLOSER! But they don’t tell her from which direction, duh. The also obligatory science morality lesson is heavy handed and a little fleeting. You could take a squeamish friend if you decide to experience the 3D because it’s not terribly gory for a shark film. There is one really, really sad moment, but little gore unless you count the obligatory severed human arm. At least this time they learn a lesson and get a bigger boat.

I recommend seeing The Meg if you’re fine with going to the theater with little expectations of deep acting and a clever, surprising script. This is a pretty, inoffensive, summer theater creature feature with the best 3D I think I’ve ever seen.

And…Fin (Yeah, they ended the film with this. Is it funny? I guess it depends on who you ask.)