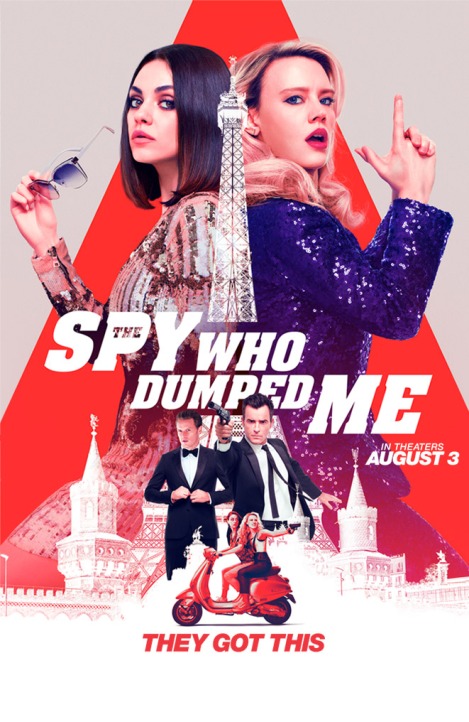 The Spy Who Dumped Me

It’s been a long time since I’ve gone to see a movie as funny as this. There weren’t as many people in the theater as there should have been on a new release weekend, which makes me afraid not enough people are going to enjoy this laugh fest, but judging from the number of belly laughs everyone enjoyed it. I even snorted once but no one made fun of me. At the end, some people applauded.

After a slow start the abundant and often hilarious jokes came fast and furious and in many forms. Not all of the humor was original, my favorite bit being the homage to the Porky’s tallywhacker scene where the audience is invited to participate in the actors’ infectious laughter. Another visual joke made me flash back to the last time I saw huge silver balls hanging from the trailer hitch of some insecure boy. I was pleasantly surprised to hear a spy joke that was not only funny, but so obvious I was shocked I’d never heard it before, and it got generous groans from the audience. Some movies go with a relentless barrage of the funny hoping some of it works, which always feels overwhelming, but Spy’s bombardment works well because nearly all of them hit their mark. Unfortunately, the very end of the movie falls a little flat but I didn’t mind at all after an hour and a half of hilarity. We laughed all the way home, recounting our favorite bits, like putting a cold and relentless assassin in a Borg mask. (Funnier than it sounds because it was subtly done.)

I was surprised to read a review last week that the chemistry between Mila Kunis and Kate McKinnon was weak, and I disagree totally. Writer-Director Susanna Fogel is right to say Hollywood gets comedies with female leads wrong by making them all about petty rivalries or other such nonsense. The women in Spy never fail in loving best friend support of one another, which is not only refreshing, but creates space for a brighter spotlight on the humor. The two women are very different from each other but complementary in their approach to humor. Both create their funny using familiar approaches, Kunis wide-eyed surprise and McKinnon goofy physicality, in this movie without going as far as she did in Ghostbusters.  The men are handsome but forgettable, and the only actor misused by the film is Gillian Anderson of X-Files fame, her role here relegated mostly to mugging for laughs. In their only scene together Kate McKinnon plays up the girl crush you know she had in the 90s on Anderson, whose character beautifully messes with her head.

The weakest aspect of the film is the romance, which feels tacked on, and where there actually is no chemistry between the two actors. There is a really gory scene that drew a lot of gasps, and I was very pleased at the attempt at diversity with a couple of fresh and funny faces. The very end of the movie fell flat on the humor, and the easter eggs weren’t more than mildly humorous. Nevertheless, we laughed all the way home – and we live a long way from the theater.

I highly recommend going to see The Spy Who Dumped Me because it’s hilarious and laughing with a crowd of people is the best way to enjoy a comedy.