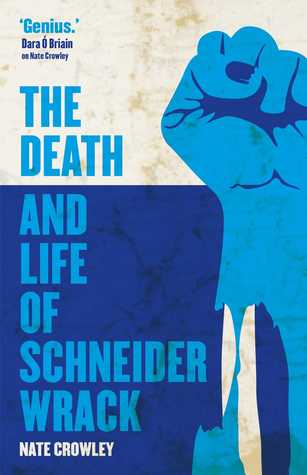 The Death and Life of Schneider Wrack

I’ve read a lot of zombie books, but one about a zombie slave on an ocean planet is not something I’ve tried before. Schneider Wrack wakes up zombiefied and goes on to lead a grisly and fascinating zombie slave insurrection. This first half of the book is spellbinding if only for the totally wtf ideas and scenarios presented by author Nate Crowley, who wrote this book after tweeting a poem a day for 76 days for a friend. The micro fiction arena blended nicely into the much longer form, especially with Crowley’s ability to saturate the prose with fantastical beings and settings, sometimes using words I had to look up. Unlike Zone One, though, it didn’t make me cranky.

There are also a lot of British-isms that went over my head, and I sometimes wondered if he wasn’t making up words just to turn up the freak, which he did without a massive self-consciousness that screams “I’m freaky!” at you on every page as with The UnNoticables. Once it hits the halfway point, though, there is an abrupt sea change where Death and Life changes from a rousing zombie sci-fi adventure into a Lovecraftian zombie Heart of Darkness.

The second half begins with a huge jump in time, place and character that fortunately turns out to be a flashback. Nevertheless, I began to have a difficult time maintaining my interest, especially as it kept repeating what had happened in the first half, much like an author would do in a sequel. As it turns out, the book actually is two novellas slapped together. The author should have made a point of not revisiting the first half like it was a different book.

Despite the arcane settings and story, and the perpetually gory action, there is some deep philosophical thinking and odd jokes, like one zombie exclaiming to another one beautiful morning, “Doesn’t it feel good to be alive?”  At another point, a zombie wearing a hardened military exoskeleton tromps around the jungle with an enormous zombie crab strapped to her shoulder, and, “he made plenty of encouraging noises, and only occasionally gave in to the temptation to squawk ‘Pieces of eight! Pieces of eight!’ in her ear. She hadn’t laughed yet, but he was sure that was because she still hadn’t gotten the joke.”

I was uncomfortable with what seems like the mother of all deux ex machinas throughout the first two thirds of the book, but all was explained later. The explanation made me sad for the zombie in question, and that’s a sentence you don’t often get to type. Crowley’s world building is solid and as you learn more history of Wrack’s world, and others, all the massively esoteric bits come together to make grim sense. Even more grim than waking up a zombie slave.

I recommend this book, especially if you don’t mind switching zombie genres halfway through from unique to uniquer. There is gore and pathos and a wonderfully drawn series of worlds with deep histories and recognizably human predilections, even for the human zombies. Did I not mention there are many kinds of zombies? My bad.