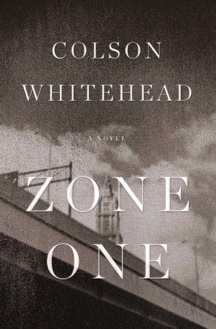 “Zone One is not the work of a serious novelist slumming it with some genre novel cash-in, but rather a lovely piece of writing.”

The critics’ blurbs gave me the first indication that I was about to stumble into Literature working in crass sub-genre.  They said it wasn’t but within a page I discovered they were lying, or incapable of telling the difference.

This Amazon review is more to the point.

“Collapses under its own tediously sesquipedalian prose. See what I did? I used big words unnecessarily.”

And it’s not even that Colson Whitehead used words like pullulated (twice), recrudescent, etiolated and interregnum to fry your brain, it’s the precious work of a fashionably disdainful hipster that irritates.

But I feel like Whitehead isn’t disdainful of the genre so much as he is of American society.  He uses zombies the way they should be used, as a palette on which to paint his story of how brittle civilization is, of how being heroic isn’t necessarily a matter of having a bigger gun or organized resistance. Zone One follows three days in the life of civilian contractor Mark Spitz, a cog in the post-First Push battles going door to door in Manhattan cleaning out the remaining “skels” with minimal property damage so people can move back in with a minimum of post-apocalyptic fuss.

The story is interesting, once you scrape off the crust of high class language.

“He smiled. It was the faintest of disturbances, as if a black eel miles below on the ocean floor had turned in its sleep and left this slim reverberation on the surface.”

Mark Spitz (not his real name) is perfectly positioned for us to observe events.  Unfortunately, you must continually wade through Whitehead’s stings of contempt.

“It wasn’t the hotel room itself that was important, with its blotched carpet and missing room-service menu and pilfered corkscrew, but the outcome nine months later.”

“Who had ever died during the installation of a backyard water feature, one that might dribble joy from polyvinyl chloride tubing?”

“The surfaces of the desks were thick and transparent, hacked out of plastic and elevating the curvilinear monitors and keyboards in dioramas of productivity.”

The critics also wax brightly about the action sequences, and you might think there are a few in this zombie novel.  Fortunately there are not.  Action denotes quickness, which means the author would have to curb his meandering prose and keep his timeline more linear. There are several places in the book where it’s difficult to follow when he is in the story.  He tends toward digressions with some of them departing so subtly it’s difficult to keep up. A long time ago I read A Short History of a Small Place, a hilarious novel that masterfully weaves digressions into the main story.  Colson needs to read it, too.

Once I relaxed into the pace and idiosyncrasies of the book I enjoyed it quite a bit.  Mark Spitz and the many other characters are interesting and you become invested in their stories. The setting is one of the characters and you really feel its death by zombie horde as Spitz and his gang do their work in the lifeless metropolis. Through the book is a humorous thread concerning accursed Connecticut. Dreary Connecticut, goddamned Connecticut, murderous Connecticut, mephitic Connecticut (see what I did there?) is bashed without a word of explanation. The book has a bazillion corners and once you’ve seen around all of them, learning intimately the histories and feelings of all concerned, understanding fully what is at stake, you will become completely engrossed in the tale and what more can you ask from a zombie novel?

CFR: In Addition: Mr. Whitehead needs a better Website as the link to Home from the Zone One page is broken and his main home page seems to be lacking links.

And wow, who knew Connecticut was so rotten? 😉