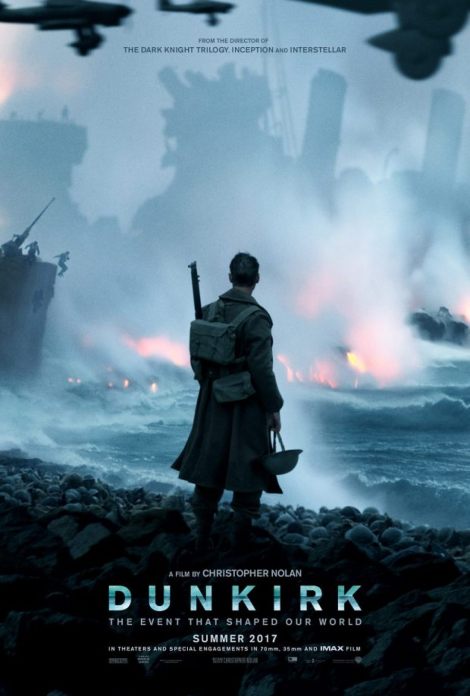 For a movie about one of the most important moments of the largest war this world has ever seen, it begins soundlessly as we watch some British soldiers wander down the abandoned streets of a small French town.  Before long all but one of them is dead and the last one is running for his life, abandoned by his mates, his equipment, and his nerve. Escape, however, was not so simple as running away. Over 300,000 others were trying to get off the same beach as the Germans strafed and bombed them. If they didn’t get back to England, it was game over and Hitler wins.

A viewer should remember that Dunkirk happened near the beginning of a war that killed about 50 million people world-wide. If the English army had been trapped on the beach and destroyed, nothing could have stopped Hitler’s march. Something often overlooked is how near to World War I this is. Granted, the world saw many conflicts in the 19th and early 20th century that wiped out swaths of people by the millions. MILLIONS. But England had just lost 700,000 men in WWI twenty two years before, about the time most of these men were born. The country was still war weary, and the men on the beach had grown up understanding that war is horrible. They went anyway, and they knew the cost if they lost.

This is a complicated story and the filmmakers used two mechanisms to condense the ordeal into a couple of hours. One is a series of time jumps at the top of the film. Eventually all the plot lines work their way to the same moment, but it can be confusing. It seemed odd to start separate stories on separate days in different places, but as the strands approached each other it all made sense. I can’t think of a better way to come at the event as a whole. Next, the core of the film follows two deserters as they experience every kind of hardship on their fight to get off the beach. In this way, the viewer isn’t continually introduced to new characters or the story become so involved in one aspect that others are neglected. Dunkirk was all about fighting to get off the beach by sea, the fight in the air to protect them, and the thousands of small private boats that braved the Channel to rescue them. There are a lot of moving parts, and having the deserters experience all of them was brilliant.

You get a sense of the horror in many ways, large and small. The movie lets you feel the antiquity of the weapons, though they were the height of technology at the time, with the crude aiming mechanisms of the planes, the slowness and vulnerability of the ships, and the lack of communication. There are no quipping buddies. The men are mostly silent, obviously terrified, and often consumed by the fog of war.

Speaking of which, I couldn’t help but think that Mr. Dawson’s story of taking the Sunday family boat into war is a pastiche of the real story of Charles Lightoller, who survived the Titanic and thirty years later braved German strafing in his pleasure craft. I understand why they wouldn’t use his name, but I thought of him all the same.

This is a stellar example of how to do a war movie, with first rate acting, amazing practical special effects, and the clever manipulation of a tangle of story lines to make a coherent whole. I highly recommend that you see this some time. You might need a Kleenex, you might not, but you will definitely be affected by the uplifting story of the Dunkirk Evacuation.

CFR: In Addition: You can see the CFR review of Dunkirk here.