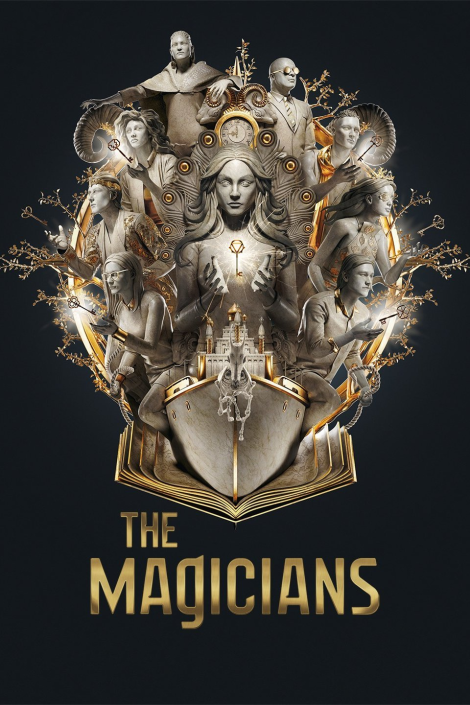 TV show poster for The Magicians.

You’re all familiar with getting a Christmas present that’s only a part of something. I got The Magicians, a book I’d never heard of, and which I couldn’t put down once I’d started. So then I had to go out and spend a bunch of money (hey, books were sixty cents when I was young) to finish the trilogy, which I did in about a week of holiday reading.

These novels are not frothy YA books with pain that is mostly existential and only moderately physical, and the characters are more realistic in that they tend to be a pain in the behind most of the time. Author Lev Grossman doesn’t seem to be afraid of anything, from gay sex to cutting off a student’s hands to giving his main character depression. That last is manifested mostly through whininess and an inability to understand other people. Quentin, one of many brilliant and privileged students of Brakebills University of magic, is not someone you cozy up to, or at times even root for, but I found myself curious about where Grossman would take his story.

Brakebills is not much like Hogwarts. It’s not cute, to begin with, and there is no whimsy to be found.  None. Magic is all hand contorting and memorization of large matrixes. It’s hard work and also a lot more dangerous. There are deeper subplots that the reader is introduced to over the course of the series, so you have to pay attention and remember things. I’m not as good at that as I used to be. Major, unexpected turns in the plot happen time and again which is a great way to keep a reader’s attention, though Grossman can get bogged down in a subplot, sometimes doggedly filling in every little bit of detail.

The students at Brakebills are a lot different than at Hogwarts, too. They’re older and more connected to the wider world, as interested in learning magic as they are in learning to mix drinks and party. I noticed that Grossman shows his students in class and/or studying about as often as Rowlings, which is to say not that much. It makes me wonder how much of learning magic is super endowed wishful thinking. Of course, there’s not much interesting going on in classrooms until one of the students get eaten anyway, so I’m fine with it.

The books are really fine and I recommend them if you’re looking for a more adult fantasy story than usual. If you do read the books, though, be really careful about then turning to the tv series that is beginning its third season.

The changes from book to film in season one are so massive it can give you a migraine. The producers have found actors who really capture their written counterparts, especially Quentin who hems and haws and talks at his shoes as you might expect. I know it’s a standard reviewer line, “There are changes.” But here we see characters disappear that shouldn’t, or not show up, or are re-named, or made up to fit the new storylines, or are the same as the book except they do totally different things in the new plots. Even when you think you’re recognizing a book plot, events happen wildly out of order and whole plotlines are changed and remixed or completely fabricated so you’re kinda right and kinda not. On the down side, the end of season one bore almost no relationship to the book at all. On the up side, there’s no way I could have anticipated the end of season one because it’s not in the book, so it was definitely suspenseful.

There’s quite a bit from books two and three in season one and two, so don’t expect the stories to move in anything like a straight line, as they do for The Expanse, for example.  By season two, though, the show really improves. One reason is that the book has very little influence by this point. The actors have really gotten into the roles, and the humor is more pronounced. They are very good at funny. I like how the stories are grounded in both the magical world of Fillory and Earth at the same time, and that a lot isn’t made of the magics or magical creatures of Fillory. This is, no doubt, the product of fifty years of increased fantasy on television, and this makes me very happy.

It’s a little tricky reviewing The Magicians book and television series, because they are so entirely different. I like both, but it’s continually jarring to see how seriously much the tv writers have changed things. If you started on the show, I would tell you to wait for a while after the show is off to try reading the books because I think that would be even more difficult than the other way around. The books are really fine, so I do recommend reading them, if you can handle adult oriented fiction, which these days means sex, violence, betrayal, and heavy drinking. Whichever route you choose, you should check this story out, because it’s very entertaining. 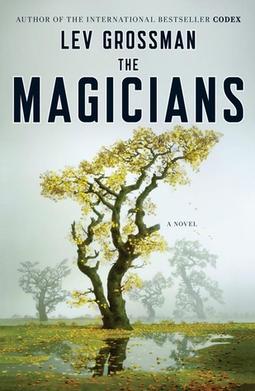 CFR: In Addition: Meh. I watched the first episode of The Magicians on Syfy and utterly loathed it. I was tired of the trope of the women all acting sexy; none of these characters acted like they were in college; that’s not how college is run; etc. I mean sure all of these critiques are minor, but I just can’t get over it. Hubby loves it though and watches it on TiVo. I might try the books. He likes those too. If you enjoy this show, then ENJOY IT! Variety in life and entertainment is good.