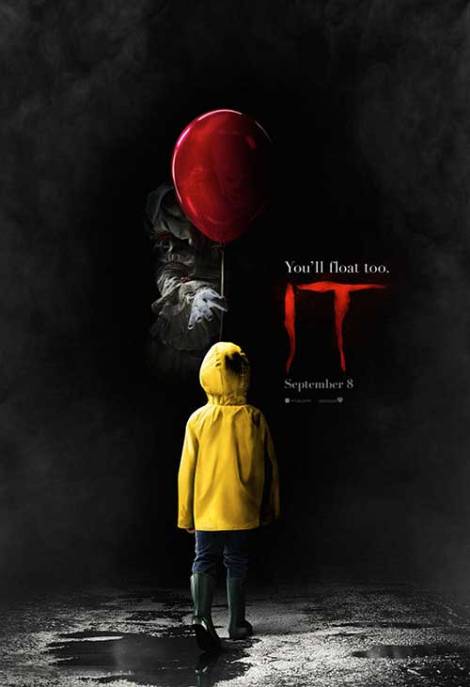 OVERALL: Thoroughly enjoyable movie. Well made and well acted. Did nothing to dispel my dislike for clowns.

Note that IT, for me, was not as scary as Woman in Black, but then again, what is? Oh wait, Get Out.

POINTS: It was a competently made movie.

PITFALLS: Although the movie was well made, it felt more like a light drama than horror. The scares in this were all “jump” scares, which are fine and good and I jumped, but well…. there could have been more. This is not a big pitfall, mind you. More of a pebble in the road.

Oh and I hated that Pennywise kept drooling. I wanted to punch him AND hand him a napkin to wipe his mouth.

FEMALE CHARACTER(S): We really only have one and that is Beverly Marsh played by Sophia Lillis. She did a fine job and I liked that she was often brave.

CULTURAL PITFALL(S): I was very disappointed with the slut-shaming in the movie towards Beverly. WTF? Her character is somewhere between 11 and 13. Slut-shaming a child is really low and sexist and obnoxious. Especially when adults slut-shamed her. What made me extra mad was that Beverly was clearly hurt by these comments and then had to justify later on that the stories about her were not true. I don’t remember this being an issue in the TV series so why have it here?

Also the character Richie Tozier needed some serious adult supervision as his over sexualized and sexist language was totally inappropriate at all times. There was just no need to keep the stereotype of bratty child alive. This movie would have been better without it. In fact, I think his character is why I didn’t really love the film.

1.) “…Effing Clown” and baseball bat. I don’t want to ruin it for you but OMG, Finn Wolfhard delivered the best line in the movie. Just go see and you will know.

2.) Lighting filter. I loved how the light filter on the camera changed for the ending. Or maybe they did something else to film to change the overall coloring of the movie from blue-grey to yellow-gold. I liked it.