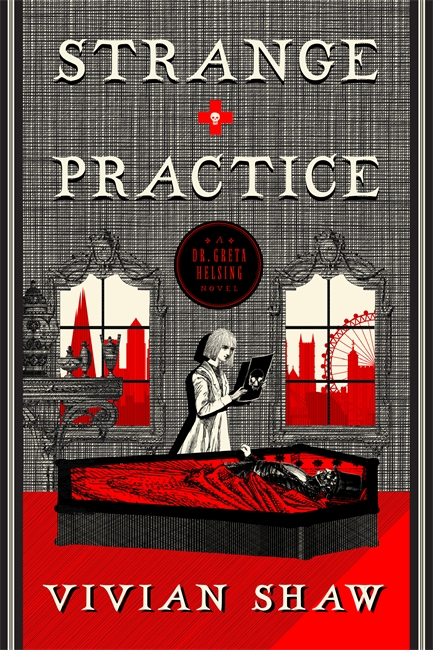 There are some sick monsters in London, and they’re lucky to have Doctor Greta Helsing (the family dropped the “Van” a while back) seeing to their needs. She works hard to keep her worn down clinic going, and dreams of someday being able to afford a 3D printer to make really good mummy bone replacements. Tonight, though, she’s making a house call at Lord Ruthven’s estate to treat an injured Varney, who has been attacked by men wearing monks robes and wielding pointy stabby knives.

Strange Practice is a straightforward supernatural thriller, sort of. Doctor Helsing is fighting to protect the type of supernatural characters that are typically a thriller’s antagonists. She believes wholeheartedly, as she tells a friend, that, “You are not human, but you are PEOPLE. All of you. The ghouls, the mummies, the sanguivores, the weres, the banshees, the wights, the bogeys, everyone who comes to me for help, everyone who trusts me to provide it.”

Author Vivian Shaw’s monster system is complex and firmly rooted in all manner of folklore and legend. Set in modern London, the also complex system of secrecy and protections are just as thoroughly considered, making the book very believable. Shaw has an easygoing writing style that doesn’t linger too much on any one aspect, such as action scenes or exposition or romance, which I found refreshing. The end of the book is rather languid, with a winding down from the explosive climax rather than a sudden, screeching halt. She gives us a look at how the characters deal with What Just Happens, and I liked that as well.

I’m not sure quite how she did it, but the author also makes it difficult to remember you’re reading a book set in modern rather than Victorian England. Time and again I was dragged back to the present, giving the book a charming, floaty quality. A good example of how she does this is in the next book in the series, Bad Company, where she is describing the Grand Staircase of the Palais Garnier opera house that night:

High above, the ceiling was painted with dramatic scenes of allegories in saturated color. It should have been a cacophonous mess of design elements, and instead, somehow, it all worked. The over-the-top opulence offered the same kind of uninhibited, glittering cheer as a polished drag queen’s performance.

Overall I wouldn’t call Strange Practice great but all my quibbles are small, like I thought she could have better pacing in the action sequences, so I consider this a very good book and I’m looking forward to getting the next in the series to see how Dr. Helsing continues to treat her wonderfully interesting clients.