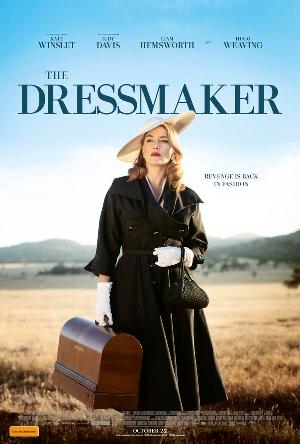 The first thing I noticed is that there are a lot more big names than I expected, with Kate Winslet, Judy Davis, Hugo Weaving, Liam Hemsworth, and others I expect Australian viewers would recognize.  From the opening scene I was struck by an attitude of malicious fashion as Tilly (Winslet) steps off a bus in the middle of the night in the middle of nowhere, 1950s outback. She’s wearing a gorgeous dress, which the local sheriff (Weaving) notices immediately, and she looks the part of a powerful haute couture designer – except for the nervous shake of her cigarette. The short scene introduces a large amount of story in only a few moments, a handy skill for unpacking several twisty storylines without bogging down or confusing the viewer.

The next thing I noticed was the film is a lot more than the Nexflix description. For the most part The Dressmaker is a revenge drama with more of the depth and stylishness of The Count of Monte Cristo than Death Wish, but each of the twisty storylines is also a different genre, of comedy, melodrama, murder mystery, and romance. The revenge storyline is where the fantasy elements loom largest, with many striking visuals of beautiful dresses like vibrant desert flowers contrasted the with the dingy mid-century back country town.

Honestly, I can’t think of much more to say about the film except be sure to see it. I was by turns laughing, clutching my blanket, and getting a little weepy. You might say I was enthralled to the end, which I found satisfying. It’s a gem of a film that didn’t get a lot of attention – that I noticed – when it played last year, and I don’t even remember why it ended up on my queue. I’m just happy I saw it and I think you’ll enjoy it, too.