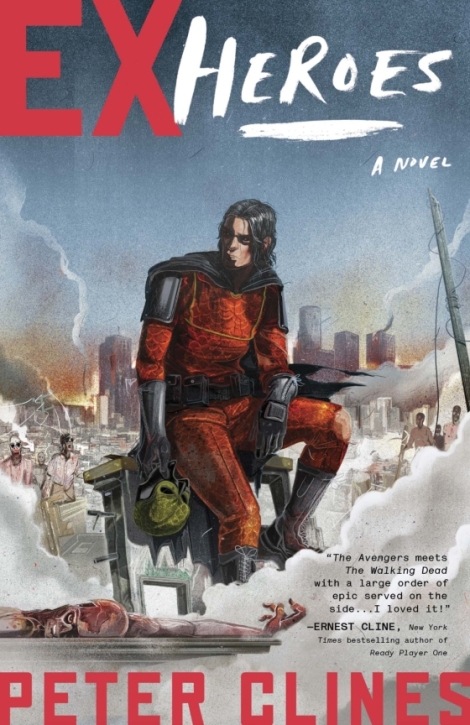 Boom! Whoosh! Thunk! Your friendly neighborhood ex-Heroes are on the job at The Mount, which used to be Paramount Studios in sunny Los Angeles. Now it’s a precarious stronghold against millions of zombies pressing at the gates, and one last gang declaring a turf war on the ravaged metropolis.

Fortunately for mankind, a surge of superheroes began to populate the world just before the undead plague and had turned – most of them – to the traditional superhero task of Making Things Better. A few of them managed to escape a ghoulish fate and have turned to helping the survivors make a new life.

The title is clever because everyone calls the zombies “exes”, as in “ex-human”, and the superheroes’ night jobs have become obsolete, ex as well. These Marvelesque heroes with gloomy DC attitudes have comic names like Gorgon, The Mighty Dragon, Stealth, and Cerebus and the pages of the novel have a decidedly comic book feel to them. The zombies are properly dangerous, not fast but too numerous and poisonous to discount, and the heroes each have strengths and weaknesses, and demons of their own to overcome. By the time I got to the climactic fight at the end, with much smashing of bodies and cars and buildings, and much throwing around of dorky quips, I began to see panels in my head, and it was good.

The well-drawn heroes each have chapters inserted into the main story, of both their origin stories and their roles at the dawn of the zombie apocalypse. Author Peter Clines created the heroes as a youngster, when he dreamed of writing comic books like the ones he loved. I think he has something even better here, mashing traditional tropes of two popular but unlikely genres together to create a fun and exciting story. Superheroes and social media have a long history, for instance, and who would be better at traditional post-apocalypse scrounging than a man who can fly AND is impervious to bites? Both genres are also known for covering deep social commentary in a colorful format, also well done in this book.  My biggest disappointment is that there are only two women superheroes. Granted, they are awesome, but I wish there had been more.

This is a quick read and if you like either comics or zombies you will probably like the book a lot. exHeroes is an example of what seems to be a new trend of setting zombies in ever more exotic pairings and I enjoyed this one quite a bit.

CFR: In Addition: Dang it Mildred! Now I gotta get this and read it too!