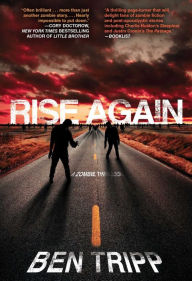 Rise, Dead, Z, Day, Zombie, Apocalypse – these are common words in the titles of zombie novels. The genre is far from set in stone as far as what is permissible inside the cover, but there are definite title memes and character tropes.

Recently in zombie fiction we have seen a increase in women protagonists who are “smart”, “courageous”, “determined”, from Sophie Littlefield’s Aftertime to Jonathan Maybery’s Dead of Night we have seen these women heroes, interchangeable with a male protagonist except that they must also be “troubled”, alcoholic, rail thin, androgynously named, completely unlikeable and yet loved by many, and able to take an avalanche of physical injury with a fatalistic sigh and gung-ho attitude. In the 70s they called that being able to “bring home the bacon, fry it in a pan, and nevernevernever let you forget that you’re a man!”

Cashing in on these two recent genre gold mines, zombie novels and female heroes, Hollywood artist and designer Ben Tripp has added another of this new heroic archetype in the book Rise Again. I made sure to add the Hollywood qualifier because the book has a strong cinematic feel which makes it a weaker novel so far as I’m concerned.  It’s a longish read and goes far afield in time and space, and there is a lot of gore and action once it gets going, but I think it’s a stretch to call it a thriller because the lead character seems able to survive any situation that should kill her deader than a walker.

Troubled Iraq war vet Dani, who drinks heavily and ignores the kid sister who loves her anyway (see?), must do her duty as Sheriff of Forest Peak California on the Fourth of July.  The day turns into a horror of zombies and death and trying to save as many people as she can though all she really wants to do is try and find her sister who had run away from home just that morning. By the end of the day the world as we know it is dead and a new way of life is just beginning.

The prose is solid, the plotting is cohesive, Tripp has obviously done his homework where needed, and he appears to be very familiar with the southern California/Death Valley area. The author is generally good about showing not telling but unfortunately the characters are never better than deeply explored stereotypes.  Tripp tries to make the lead character, Dani, deeper than a puddle, at one point having an internal dialogue about why she’s trying so hard to find her sister, where’s she’s going to try and find her sister, what will happen if she does manage to find her sister…  *headdesk* That’s not fleshing out the character, it’s just boring and meaningless to advancing the story because she’s thinking all of these things as she’s in a car looking for her sister. Other main characters are a gay man who has a tv show about interior decorating, a ditzy veterinarian, a grizzled Vietnam vet with a few moves left, and some army-esque thugs who are physically dangerous to everyone but the zombies.

I liked the characters but I’ve seen them a few too many times before.  His zombies are different enough to stand out from the crowd and I might be interested in reading the sequel some time.  The last page of the book has a wowzer of a last line that screams sequel, but in a good way.

Rise Again is a solid zombie novel, but it doesn’t have the emotional resonance of Rhiannon Frater’s work or the thrill-a-minute density of Omega Days.  You won’t go wrong with this one if you want to spend an afternoon cuddled up with the zombie apocalypse, but you’ll find yourself wishing it was just a little bit better.