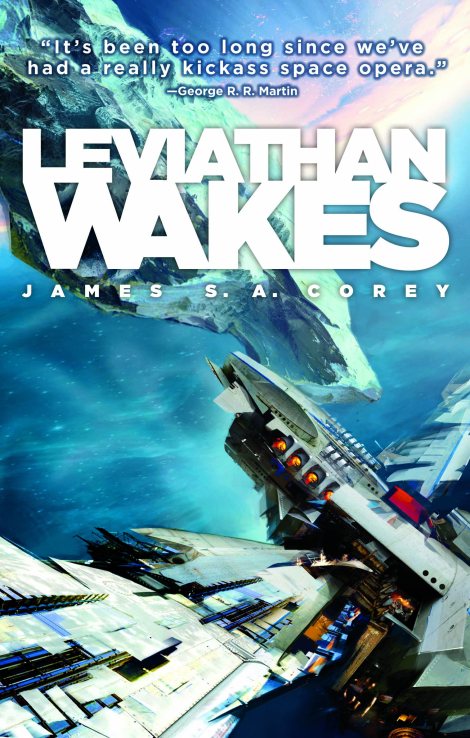 A Leviathan is both something of immense size and power, and also any huge marine animal.  Wake can be either someone awakening from sleep, or becoming aware. It can also mean the turbulent water behind a fast moving boat. This very large book, in what is supposed to shake out as nine very large books in a series, follows two tracks of the same story.  Two widely separated and turbulent tracks sweeping through the perilous sea of the solar system.  On one track is James Holden, the Executive Officer of an ice hauler working the route from Saturn’s rings to the Belt – anything beyond Mars, and humans have penetrated the solar system as far as Uranus at this point in our future history. Over on Ceres, rent-a-cop Miller has his own problems, including being assigned the crap job of finding and rescuing (i.e., kidnapping) a rich man’s daughter before it hits the fan in a brewing civil war between Earth and Mars and the rest of the solar system. The title of the book is really clever, and so are the words inside the cover. You won’t realize just how much until you’re deeply into the story.

The book begins on the first page with some rather harsh action that will hook you right off the bat, and as with any well written book, beginning in the middle and blazing on from there.  While you will get to know the main characters very well you will not spend a huge amount of time reading their backstory or encyclopedic dumps of their feelings.  You do learn what you need to in order to understand their actions, but the story doesn’t stop to let you catch up, instead rolling steadily on for nearly six hundred oversized pages, alternating chapters between Holden and Miller.

The author, James S. A. Corey (pseudonym for Daniel Abraham and Ty Franck working in tandem) have crafted a solid and believable political, economic, historical and ethical framework on which to hang a story that doesn’t go where you might think it’s going and gets there a lot faster than you might expect.  Everything feels real, from the prevailing bigotry to the nature of evil in this future of humankind. Everything is really different, and nothing has changed.

Science plays an important role in the story, since millions of people live in space and you kinda really need science to do that. I really enjoyed how there was no fantasy science in Leviathan Wakes. Instead of strolling along the boulevard using artificial gravity – whatever that is – on a smaller-than-planet sized sphere or habitat, you’re going to live with the Coriolis Effect. There is no taking for granted, or even forgetting, that everything you have in space including the air you breathe has to be shipped from somewhere and constantly safeguarded. Need to get somewhere fast?  There’s no way without crushing yourself with the heavy gravity of high acceleration.  This is all very refreshing.  Realism makes things seem more, oh, real.

There is a distinct military presence in the book, and it is mostly sympathetic and also without the fantasy science. The only other science fiction author I’ve read that tries hard to get the science right in outer space warfare is Elizabeth Moon.  War is always hell, but in space it’s difficult as well.

About halfway through the book I noticed it was part of a series, and then I found out that there is a tv show based on the series.  The Expanse is a SyFy (stupid name) network show that has gotten good reviews from most people, but a constant complaint is that it’s a little difficult to understand just what the heck is going on.  Apparently, you have to pay attention while watching The Expanse.  It also helps if you’ve read the first two books because the show follows Leviathan Wakes character stories with character stories thrown in from the second book, Caliban’s War.

After watching the first two episodes of The Expanse I can see why people like it.  As with the novel, the action rarely slows down and for the most part (so far) follows the novel rather closely for a tv series.  It always makes me happy to hear dialogue lifted directly from the source material (which is why I cheered while watching the movie Titanic, which I don’t recommend in a crowded, weepy theater) and to see action I’d only seen on paper before.  There are some differences, like physical changes in some characters that can’t be helped, and though they make a strong effort to portray weightlessness it just doesn’t work.  It never will work on tv until they can either a) afford to rent the vomit comet every week to film in, b) make all sf shows using cgi actors, or c) film in space.  My biggest technical beef with the show is the sound.  I have to watch with my finger on the volume button and that gets old fast. The characters closely resemble their print counterparts, though Miller the cop is not as sympathetic on screen.  There are also a lot more Caucasian actors than I would have expected.  Hopefully that will change.

I heartily recommend that you read this leviathan.  It’s fast moving with a realistically complicated milieu and a story that will keep you on your toes.  If you’re going to watch the show, read the first two books first though that might take as long as a month, unless you don’t mind being a little lost about half the time through missed dialogue and portrayals of space politics without a prose exposition. 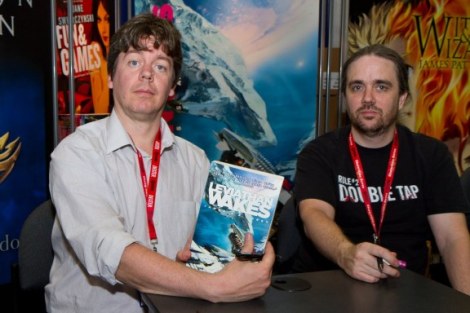 Authors Daniel Abraham and Ty Franck who together are James S.A. Corey. 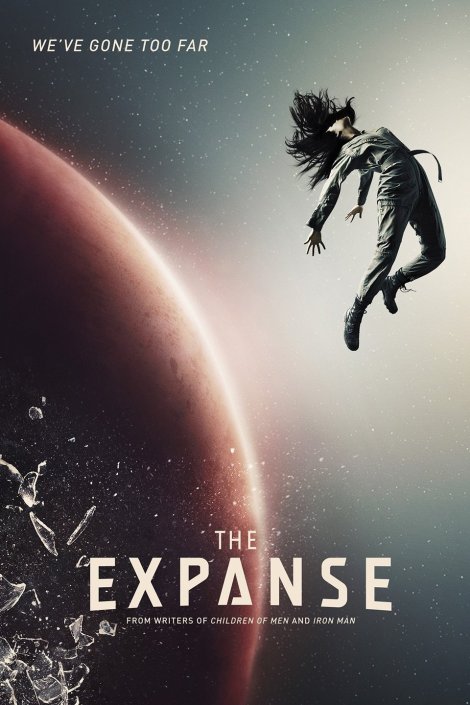