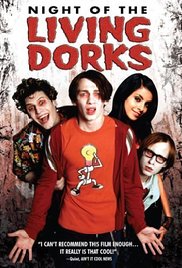 Night of the Living Dorks

This is my second trip to Germany on the Zombie World Tour, the first being Rammbock which I liked as a basic zombie film that covers all the tropes. Night of the Living Dorks does the same thing, only this time for nerd movies like American Pie, Napoleon Dynamite, or Revenge of the Nerds.  Theoretically there are differences between geeks, nerds and dorks, and when you take a close look there are precious few films that center on the dork.  This film’s protagonists are true dorks.  They’re not terribly intelligent, they’re clumsy and they’re foolish, especially about women.  The dorks in Germany also do drugs, have regular morning stiffies and drive VW vans.

The first thing I noticed is from the gag reel on the DVD. It’s oddly comforting to know that actor I-forgot-my-line-gibberish-speak is a universal language. The second thing I noticed is that dork derision seems to also be a universal language.  After an introduction in Haiti, true home of zombies, the movie follows Philip, Wurst and Conrad, three friends at Friedrich Nietzsche High School who endure daily abuse at the hands of all other students except the goths, who are way below dork on the social ladder.  Our guys attend a lame but funny voodoo ceremony that actually works on them when they crash on the way home and wake up dead in the morgue.  There is very brief confusion and then total acceptance of their new found deadness, which comes with super strength and tumbling body parts. At the de rigueur massive party that assembles when the of course awful parents are away, the action heats up even more as one of their zombie gang begins to enjoy the brains too much.

Reading this you might think this is only a zombie film, but the bulk of the story is about Philip being in love/lust with the unattainable girl with the evil jock boyfriend while ignoring the very attainable and perfect for him girl next door. Conrad is constantly replacing his goony glasses, Wurst chases his own unattainable woman, and Philip’s sole mission in life is to finally get laid and when it looks like he’s close during the huge kegger at his house, darned if his parts don’t fall off. Awkward!

It was about this point that I wrote in my notes, “Something weird just happened.  The joke got really old.” That was “joke”, singular. This is a by-the-numbers every American nerd movie you’ve ever seen, with German highlights.  And zombies.  The same joke can be funny for a while, but not for a whole movie. Or maybe I’m just old and can’t take it as much as before.  I remember enjoying Revenge of the Nerds very much, and Porky’s  is one of my favorites.

The filmmakers play everything totally straight and it’s no mistake that the film is a massive parody of all the nerd movies ever made.  Dork moves along quickly and there is a lot of action of both the bloody and innuendo kind. The actors all hit their notes perfectly and I feel like I should like this better because it’s a solid, funny movie.  Don’t mind my curmudgeonly eye rolling.  If you like nerd movies you will like this film.

Night of the Living Dorks (2004) Trailer