OVERALL: *Standing up and applauding non-step while declaring “Oh Hells yes.”* It IS time the world new her name!

POINTS: Wow! Ok there was a lot of talk about how this show was going to handle Jessica’s rape trauma. May I just say it was perfect. We didn’t need to see it to know it was terrible. The after effects upon her and then her life and friends was palpable. This is how it should be done! And watching her road to recovery was tremendous.

FEMALE CHARACTER(S): Well duh?! Jessica Jones, perfectly played by Krysten Ritter is a fabulous, well-written, three dimensional character. Watching her rise from terrified victim to superhero is wonderful! Plus there are other great women as well. Adopted sister Trish Walker (Rachael Taylor) and lawyer Jeri Hogarth (Carrie-Anne Moss) are just so cool. Plus there are time when the women just talk like women I know do and it is so refreshing! Plus we get to see Claire Temple (Rosario Dawson) again and THAT made me super happy! Plus she and Jessica have some great banter together that just makes me happy.

CULTURAL PITFALL(S): Hmmm…. it is addressed and it is good.

1.) OH MY GOD/DESS SHE WEARS SENSIBLE SHOES AND CLOTHES!! NO HIGH HEELS! I AM SO HAPPY!!!

2.) David Tennant as the bad guy. Oh no! Talk about ruining my image of the lovable 10th Doctor!! So glad David in real life is a good person. 🙂

3.) The Bar Fight in Luke’s Bar. OMG. Watching Jessica, half Luke’s height and size, charging into his bar because she is afraid he will be hurt. The look of WTF on Luke’s face. I mean, he knows he’s Luke Cage Mr. Indestructible and why on Earth would Jessica be coming to help? Then they fight off the bad guys. Too good. Just too frakking wonderful good.

5.) “Smile.” For all the women who have had to hear this demeaning sh*t. Hells YES!

Marvel’s Jessica Jones – Nightcap – Only on Netflix [HD] – (NOTE: This makes me happier than I can ever explain. OMG Joan Jett! – CFR) 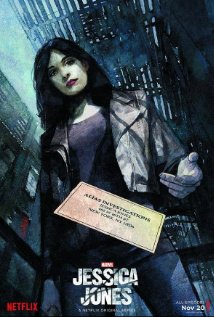