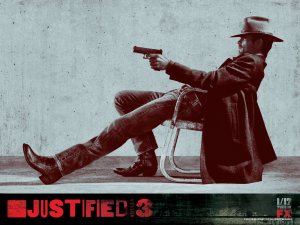 OVERALL: My my but this is a damn fine show. Thank goodness you can get it on Netflix. Since this is tragically the show’s last season, I thought I would honor it with a very favorable review and encourage you all to check it out. Worth it, worth it, worth it.

Now Hubby and I started watching this because 1.) Hubby is a big Elmore Leonard fan, and his writing inspired Justified, and 2.) Hubby is a Kentucky boy with family going back 350 years living in the Applachian Mountains of eastern Kentucky. He has family from Harlan County

POINTS: The whole show. All of it. Just enjoy.

PITFALLS: Hmm. Well I am annoyed there won’t be any more seasons after five. I applaud everyone that they want to end on a high note, but drat. I sure would like to see more.

FEMALE CHARACTER(S): We have a find range of female characters including the wonderful deputy Rachel Brooks played by Erica Tazel. These women are complex and have very understandable and real motivations. I do find Winona Hawkins played by Natalie Zea to be a bit tiresome. However I am a woman who wants the white picket fence husband so that is probably more my issue than anything else. (I LOVE my husband and he is quite extraordinary. :))

CULTURAL PITFALL(S): This is more a reflection of the culture of Harlan County than anything else. Plus the main characters constantly challenge racist, sexist, and cultural stereotypes. ‘Tis good.

HIGH POINT(S): Love the acting! Yes the plots keep me guessing so huzzah to the writers, but the acting is what keeps me coming back for more. Check out my scene breakdown below.

Oh and the theme song is amazing! Listen to it here – ¨LONG HARD TIMES TO COME¨ by GANGSTAGRASS & T.O.N.E.Z. – and then go buy yourself a copy.

DVD/BLU-RAY WORTHY: Yes. We have started collecting the series.

Now let’s do a breakdown of some awesome acting in the very first scene of Justfied.

This is THE opening scene for the series Justified. This scene tells you everything you need to know about the main character, Raylan Givens wonderfully played by Timothy Olyphant, the show, and show morality. Watch the facial expressions on the actors. Olyphant shows grief, misery, and contempt for the man he is facing. And his body, though relaxed, relaxes more at the end of the scene.

When you first watch this scene, it looks like a posturing scene, a place where two alpha dogs try to dominate the other. Then you realize, nope, there is only one alpha dog here and he does not care about dominance. He does not swagger, he merely walks. And when he decides to win, it is not to make himself look good or bigger or more powerful. He wins because he has to.