My next stop on the Zombie World Tour was France.  This film showcases a lot of stereotypes about the French, not least of which is their disdain of women.  Of all the gory, violent sequences and themes in the film, the ones concerning women were the most affecting to me.  There was other, more typically political social commentary you should find in a good zombie movie, but a lot of it went over my head because I’m not from there.  I think they were trying to comment as well about what makes a good man, but someone will have to interpret for me because I found the message murky at best.

The basic story is that a group of cops take a clandestine midnight stroll to a condemned building for a retaliatory beatdown on the inhabiting gang.  Their intentions are deadly, and boy do they LOOK tough – till the shooting starts.

The production values are good, and the zombies are dangerous, but there was just so much wrong that I’m actually sorry I watched it.  For instance, apparently in France no one ever runs out of ammunition unless it furthers the plot. The translation had to be off.  At one point a gang member alludes to being raped as a boy by calling his anus a “dick garage”.   And even dead women (sorry, “cunts” “whores” “bitches” and “sluts”) must be tauntingly threatened with rape by laughing gangs of men(?).

Except for two cameos (one with no dialogue), there is only one woman character.  As with the guys, she LOOKS tough, but demonstrates every “typical” womanly characteristic – she screams and cries and is deceitful and disruptive to the core manly group.

I think you could safely say I don’t recommend this.

The woman cop does change suddenly.  After the world class cat fight/cage match with a female zombie, she gets her face bashed.  OH NO YOU DIDN’T!  Now that her beauty is marred, the screaming, crying and unevenly applied badassness stops.  Now she is The Total Badass and no going back.  She is now ruined as a woman so she finally, fully becomes the manly hero needed for the situation.

The very end of the film sees her standing outside the building, the awesome final girl – who just murdered the only other living person who made it out with her because he’s a bad guy and she’s a cop and so it’s okay. 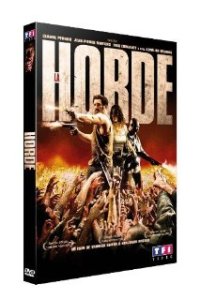