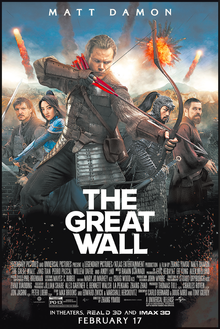 Sometimes you end up hoarding a book or movie for just the right time, like reading Robin Alexander when you need a belly laugh, or Matt Damon when you need an earnest, cute, smart hero type. I’ve enjoyed watching him since way back in the Bourne early days and I’ve never been disappointed in one of his movies. Till now.

I didn’t hate The Great Wall, because even the cover art on the box looked a little cheezy so I didn’t go in expecting high art. This was supposed to be an afternoon of finely tuned, kinda dumb chaos. Chinese film crews have worked successfully with Hollywood A listers before, my favorite example being the first Transporter movie, so I wasn’t surprised it’s a Matt Damon film, and of course that’s a bonus anyway. As well, the movie is set in a weird sort of medieval China that features a Great Wall stuffed full of ginormous engines of war, a million soldiers, and some seriously Hollywood kinds of fun military adventuring.

Entering the Wayback Machine, we find a deadly serious group of Crusaders galloping through the Chinese wastelands. One by one by one they’re picked off until only two are left to be dragged into a military court of some kind. Suddenly the film is very colorful and really gorgeous. Damon’s character is dour. From the first moment until the end of the movie he seems constantly peeved that only two high ranking generals speak perfect English in a time the two cultures never casually date. He and his man get caught up in the desperate battle the army on the wall is faced with after gearing up munitions and protocol for over sixty years. Still, they nearly get their butts whipped until the Crusaders step in to help.

And thus we have some blatant White Savior going on. Yes, the medieval Chinese army is badass, brave and fully integrated. One of the English speaking generals is a woman who matches Damon scowl for scowl. But even after over two generations of preparation, thank goodness those two European fighters were there to save the day. I couldn’t get over that and kept waiting for a part of the film where he’s put in his place and realizes he’s fighting alongside super competent people trying to save their homeland.

As I mentioned, this movie is gorgeous. There is also a lot of pageantry and loads and loads of very good looking Chinese actors. There were so many good looking actors they were too pretty to tell apart. The action sequences are massive, as in the machinery is massive, the wall is massive, and the enemy is massive. There are thousands upon thousands of the fast and toothy creatures who descend on the wall, and I couldn’t put my finger on why this looked familiar until I wrote “Starship Troopers in medieval China” in my notes. It’s that kind of frenetic and hopeless seeming story, and for the battle scenes I was mildly entertained.  I suspect I would have been more entertained if I had seen it on the big screen in the original 3D. The 3D aspect was super obvious, from some of the fighting maneuvers to war stuff flying at you from the screen.

The plot was super predictable, and the very end of the film was a little strange, but I don’t feel like I completely wasted my time. I didn’t hate it, but I was more unimpressed than I expected to be. If you’re in the mood for military pageantry and don’t mind a white savior plot with a scowling Matt Damon, then this is an okay way to spend a few hours.

The Great Wall – Official Trailer #2 – In Theaters This February

The Great Wall | The Crane Corps Fly Into Battle NOTE: They don’t do their thing until 2:49 but hey, set up. – CFR.

CFR: In Addition: “Starship Troopers in medieval China”. LOLOLOLOL!! I love you, Mildred! That is funny and perfect!