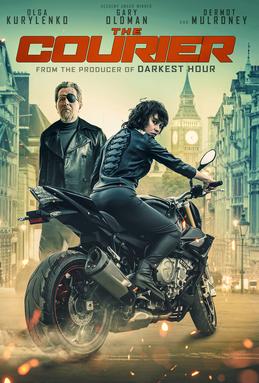 I was looking forward to this movie because I had quite enjoyed the book, which I reviewed here in 2018. But when I started watching, within seconds it was all…Wait. What!? They ditched everything? No Los Angeles merged with San Francisco seven levels deep and only the .5% can afford to live on top? No reluctant hero, rags to, well, not riches but better than rags story?  There is almost nothing left of the original material. It reminded me of the scene in Be Cool where the path of a script went from writer to grocery clerk to physical trainer to hair stylist to movie star. By the time something goes through so many iterations how much story is left? Here it’s the title, a female superhero who looks great in black leather, a corporate bad guy. Every other thing is completely made up. Well, stolen from another movie.

The film is a massive number of homages to every other action flick ever made. The plagiarisms, er, thefts, er, brain dead schoolwork copying of story, music, fight choreography, sound effects, ah heck just every second of it, was annoying at first but I finally had to admit that the sheer volume was – did you think I was going to say respectable? Impressive? – ridiculous and I began to laugh at the movie and yelling “No!” so loudly the neighbors texted to see what was going on. At least during this cliché fest the camera remained steady the whole time, no going Bourne.

The story here is that a corporate baddie is on the block for being seen killing a man. The lone witness is closely guarded and hidden so he can testify by video but of course there is deceit, dead agents, a superhero bike courier who just happens to show up in the nick of time, and a literal ticking clock so we can be continually reminded she only has so long to get the witness out of the killing box or the head minion will be killed by the corporate baddie.

I guess that last part could be considered original? Not sure why we’re supposed to care, but there you go.

The acting was pretty standard, though here is yet another actress (Olga Kurylenko) who looks the part but can’t run for beans or fight convincingly. I will admit I was impressed at how many times they could break her arm in four places and she could still use it. Gary Oldman sleepwalked through a one-eyed performance as the bad guy. Amit Shah was okay as the witness and Greg Orvis was, um, quiet as the sniper. I don’t remember him saying any actual words. My favorite was William Mosely as the head minion. From my notes, “The Rent-A-Minion is SO bad, I can’t be sarcastic enough to describe him.”

I began bullet pointing my notes, because there was just so much wrong with this movie. Here are some samples:

I had a load of incredulous notes that went like, “Aaaaand now she has to strip down to her lacy black bra.” Then, “The dialogue! My ears are bleeding!” Also, “Did she just shift that bike six times while crossing a short, flat bridge and she’s still going thirty miles an hour?” That was when I noticed the special effects guy had to be a ten year old boy. If it sounds cool, looks kewler, put it in! Sure, she can drive away on a motorcycle that is suddenly bulletproof, but so what as long as we get to see a bunch of squibs going off. So what if a highly trained officer is going into a possibly hostile room? Of course he won’t cock his gun till he’s inside because it sounds kewler! The music was horribly recycled and the costuming was, well, it was at least not aggravating.

And after ALL THAT, I was shocked at how bad the last five seconds were.

Luckily, a Paige and Holly YouTube dropped a while later and I laughed for a solid 16 minutes at something that was intentionally funny and I felt better. This movie is almost indescribably terrible. I didn’t see one tongue in someone’s cheek, and my emotions went from sad that that they didn’t use the actual story to mad that this pile of crud had millions spent on it, to shocked that it stayed as bad as it started, to laughing out loud at the endless stream of terribleness. That last may have been more exhaustion than anything else. If you want to play a drinking game with a film that will make you comatose, pick your poison here. Terrible writing, stupid special effects, lame fight choreography are all good subjects, but I would shy away from the Homage Shot or it will kill you.

Yeah, no I don’t recommend this movie, but read the books.