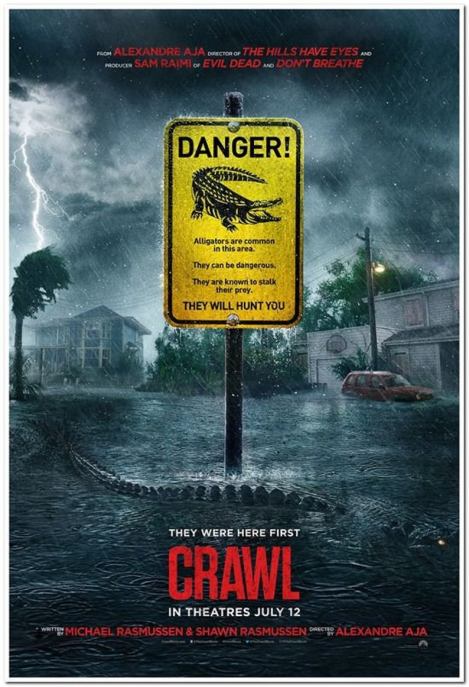 I had to be talked into watching this modern creature feature, because a movie about being stalked by huge alligators in the flooded crawlspace of a house didn’t seem like it would carry a lot of plot. I was right about that part, though they continued to stuff small chunks of plot into the chinks and holes as the characters bled and battled and crawled. Lots of crawling.

The first thing, the very first thing we learn about Haley is that she swims fast. Really, really fast. She’s an elite college swimmer, who we learn next has daddy and mommy issues. Especially daddy. There’s a hurricane about to slam into daddy’s house so she drives down to, I dunno, help or something. There’s some nice foreshadowing when she passes a billboard with a Florida gator on it, and before you know it she’s on her hands and knees in the mud of the suspiciously spacious crawlspace of daddy’s house.

There’s a lot of screaming and crawling, and crawling and more crawling. I know that’s the title of the film, but that was a lot of mucking around in a space full of mud and sharp things and nowhere to stand up, and spiders! Okay, I had an incident in my twenties that makes me unwilling to be in a tight space, and the spider scene was very effective and believable. Even with my personal weaknesses, I would have found the setting for most of the movie effective in raising anyone’s adrenaline level, even before the alligators showed up. A big part of the atmosphere is the hero of the film, and I thought she was beautifully played by Kaya Scodelario, who really captured the arrogant, can-do attitude of the elite athlete without being smarmy or otherwise unlikeable.

The creature du jour was especially well done. The graphics gave them a nice weighty feel and a good amount of menace without making them cartoony. I did wonder a time or two if they were of the genus Crocodylus Surreptitious, since they only seemed to show up when it was the most bother for everyone concerned. I also began to wonder how they got so big if they couldn’t seem to finish off smaller and weaker prey. Maybe Haley and her dad are related to Michael Myers, but those two can sure take a lot of punishment.

Another strength is the gore makeup. There are some gruesome injuries in this film, and they were displayed close up and at length more than once. If the viewer wants to shut off the movie and go for a walk after seeing the special makeup effects, then they’ve done their job well.

The writing could be stronger. They didn’t go for every standard stupid thing characters do in these kinds of film, but there was a list I made on the side that featured “easy escape ignored” and “I know what’s going to happen to him” (and I was right). I don’t know if the writers or the director put it in, but I really did love the moment when Haley, Who Has Had Enough, rises out of the water so that only her eyes show – like an alligator extra in Apocalypse Now.

Overall, I was pleased by this creature feature and would recommend it on a soggy film watching day. Everyone turns in a fine performance, the special effects are solid, and the premise works for a large part of the film. I found the ending weak, but I don’t know what I would have done with it so I’m not going to complain too much. See it if you like these kinds of films, but don’t let your kid see it and then take them to a lake for a picnic and a swim.

CFR: In Addition: Nope, nope. Nopey, nopey nope. I don’t do crawl spaces. And after viewing the trailer “DON’T HURT THE DOG!”

ALSO! I couldn’t decide which movie poster I liked better so I used both.