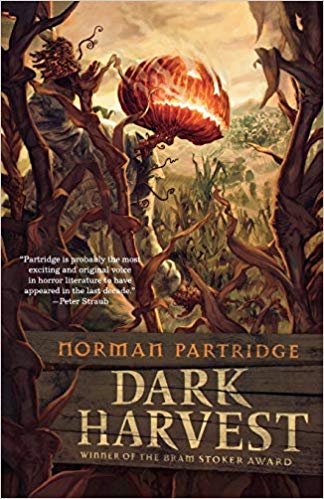 One of the first things you learn as a writer is that you’re supposed to come out swinging with your manuscript, really wow the editor before he can even turn the first page and see what else you’ve done so that he really will feel obliged to turn that first page. But this book doesn’t swing so much as flail and kick and stomp, all the while yelling at the top of its lungs about how Real Damn Great it is. I found that to be a bit much, enough that I nearly stopped reading. And then I began to notice that the book has a definite The Long Walk by Stephen King feel to it, and a little Christine and a little Tommyknockers and definitely some Children of the Corn and Carrie, except the language is more over the top than King ever managed. More folksy. More cloyingly descriptive. More nostalgic for a time when teenage boys ruled the Earth. Well, I just had to keep going because I couldn’t believe the hutzpah of the author. I wasn’t so much reading because I was enjoying the book, but because of a grudging respect for his attitude.

In a small 1963 Kansas farm town (is there any other kind of small Kansas town?), Halloween is way more fraught than anywhere else. All the boys (no girls allowed!) from age sixteen to nineteen are required to go through a dangerous test that sees the winner reaping huge financial benefits. They must face and defeat The October Boy, a mythical (is he?) creature with a pumpkin head and viney body, stuffed full of candy. Author Norman Partridge begins by speaking directly and intimately to the reader, as if to an old friend who grew up and experienced all of these adventures themselves. “A Midwestern town. You know its name. You were born there.” Odd, I thought, but I had no idea he would continue that conceit all the way through the book, getting chummy with the reader like a guy with a friendly arm around a buddy’s shoulder as he tells the tale.

I struggled through the first half of the book, and then a funny thing happened. The quintessential inappropriately sexual Stephen King Girl turned out to be more than just a victim. The October Boy is a heck of a monster, and the other SK-ish characters and settings work together to create a gory and thrilling story that’s just a little more than a hop skip and jump through Scareville. I would expect the many 1950s and 60s pop-culture references will sail right over a lot of readers’ head but I appreciated the bit of nuance they gave the story.

Dark Harvest isn’t for everyone. I never did get over being irritated by the sickeningly sweet, folksy description overkill, but it did make me nostalgic for Stephen King’s better early works. There is good depth to the plot that’s not immediately apparent (mostly because the author likes hearing himself talk so much), and when the action heats up there are many gory and nail-biting scenes that will satisfy your inner gore hound. I recommend this book with only the above-mentioned reservations. If I’m ever in the mood again for some too-sweet horror, I might look up this author.