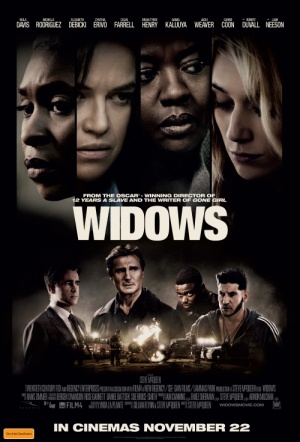 In yet another entry in the Deceptive Trailer department, we have the story of a group of women who feel compelled to finish the big-time heist their husbands/boyfriends were killed trying to pull off. At least, that’s what the trailer tells you is going on. I thought it was a nifty idea, a group of innocent wives/girlfriends thrown into the harsh world of big-time crime to sink or swim doing a big heist.  I love heist movies.

Though ultimately, this is a heist movie, it’s more about character studies of Chicago and the criminal elements who seem to work with very little influence from the cops. There are a boat load of big name actors like Viola Davis, who plays Liam Neesom’s wife. They have a rather tepid chemistry, unfortunately, though she’s great as the super grieving widow.  I learned watching this is that Neesom is a horrible kisser – unless that was him acting like a horrible kisser – and no actress should ever let him touch her breasts. Yuck. Robert Duvall and Colin Farrell totally sell the slimy and wildly racist white male politicians of the Chicago area. I’ve seen that kind of thing in person a time or two up there. It rang really true. Bryan Tyree Henry was scary mean, and his henchman played by Daniel Kaluuya was super evil, in a 180 degree turn from Get Out. Two real standouts from people we don’t see as often in a big film like this were Elizabeth Debicki, last seen in Guardians of the Galaxy 2 sporting a “perfect” golden face and Cynthia Erivo, who hasn’t done that much work yet but played a powerhouse henchman initiate here. She wasn’t in the movie all that much, but made a real impact. Debicki, one of the wives, had the best character arc of the bunch, from shirking punching bag to a woman who knows her own mind and takes no crap. Michelle Rodriguez, for a change, was a typical housewife/small business owner and not the toughest broad in the room.

In a change from the typical heist film, there wasn’t so much planning and coy red herring planting as there was a rising sense of real danger for our women heroes, who turn out not to be so innocent as the trailer would have you believe. They aren’t seasoned criminals like their partners, but neither are they unaware of where the money comes from. We get all this from the surprisingly deep plot that weaves several threads on the way to the big heist, with a couple of unexpected scenes – one of which actually surprised me. It takes a long time getting to it, though. Not that I think much could be done to shorten the film, but you need to be aware it takes its time getting to the fun parts.

Definitely see this film if you enjoy heist movies or meditations on racism in America or films about damsels in distress who save themselves. The very, very end of the movie was a little odd and I’m not sure I understand it completely, but it didn’t bother me. The acting is solid and the cinematography is just different enough to be interesting. Overall, you should see this, but understand it feels a little slow at times.