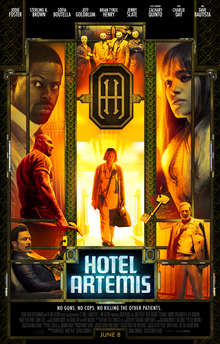 This quirky little science fiction has some good things going for it, like legendary actor Jodie Foster, who is paired cutely with Dave Bautista, an actor we’re accustomed to seeing covered in green and red, cutting up with a talking raccoon, and Sterling Brown, America’s answer to Idris Elba. Sofia Boutella from Atomic Blond plays the tough girl, Charlie Day from Pacific Rim somehow ups his crazy factor, Zachary Quinto from Star Trek – are you seeing a trend here? Most of the actors have some sf cred, which may have been done on purpose to draw a sf crowd.

Unfortunately, the film wasn’t really advertised as a science fiction, which might be part of the reason no one went to see it in the theaters. Supposedly set in “near future Los Angeles”, I think the filmmakers and advertisers aren’t aware of what the word “near” means, because I’m pretty sure we’re nowhere near 3D printing replacement livers. In this mythical future, Lost Angeles is owned by a gangster called the Wolf King (Jeff Goldblum), who has denied the citizens clean drinking water for too long and now there are major riots on the streets and in the air. This is the night two brothers make their way into the Hotel after being shot up in a bank robbery. The Hotel Artemis is open only to criminals, and only those who hold a membership. Nurse (Jodie Foster) runs the place, heals the wounds, and bosses her unruly guests with whiskey soaked gusto.

The sequence introducing the hotel is really well done, showing the worn art deco of the building retrofitted with state of the art high tech medical equipment, current day security that a 7-Eleven would be embarrassed to own, and some cool 1930s gangster era buttons and gee gaws all packaged together in a nifty setting that isn’t quite used to its potential. It’s beautiful and timeless and would also work well in a horror movie. The pace is quick, sometimes frenetic, and the action is well done.

The music is different than I’ve heard before, probably because it’s by a guy named Cliff Martinez who has this single credit on the imdb. It reminded me of early Walter Hill movies, so I liked it. I noticed there is a single credit after Production Design, Set Decoration, Costume Design and Cinematography, so it was a newbie paradise which probably explains how this film looks a lot different than the normal big money small science fiction.

Oddly enough, my biggest complaint about the movie is their big name actor, Jodie Foster. She’s supposed to be “aged” here to look a lot older than her 56 years, and she does go for a full body oldness that kinda sorta works. They also give her some highly cynical and “tough” dialogue to further age her, and a backstory that doesn’t quite work chronologically. Hollywood doesn’t seem to get the simple things, like how a woman as old as they’re trying to portray her would have a son in the time frame they’re posing. You have to see the movie to understand that point, but it kept throwing me out of the story because the ages didn’t really mesh. It made it seem like they were “extreme aging” her about four years. Foster doesn’t have a good history with sf, and it shows here. She’s by far not the strongest actor and that’s a shame.