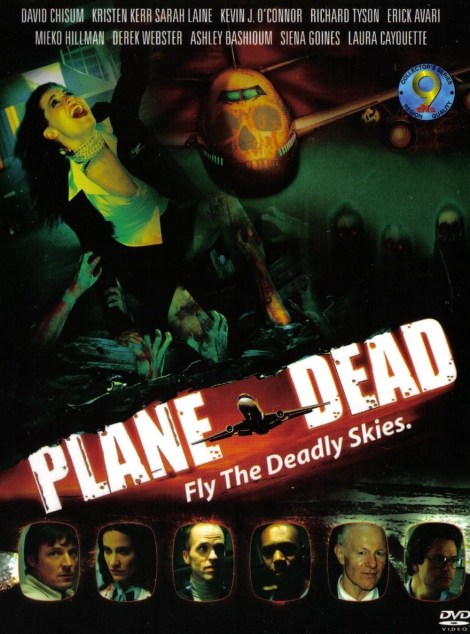 Flight of the Living Dead

How refreshing to get back to my favorite kind of movie, which, since everything happens while they’re flying over international waters makes it a Zombie World Tour. I’m also a sucker for zombie movies with a pun title. Most zombie movies are made on the very, very cheap and Flight fits firmly into that category. I assume the jumbo jet only had about thirty passengers on board for a trip to Paris because they couldn’t hire enough extras to fill all the seats, and though there were many reminders that they were a mile up in some serious storm clouds, all the exterior shots were totally cgi. That’s not entirely cheap but beats the alternative. There was not one principal actor who rises above a B level but everyone brought their A game, so to speak.

Anyone can make a cheapo movie, but to make something entertaining with no budget is rare and refreshing. One of the ways they saved money was by hiring totally unknown actors, except that I recognized Raymond Barry (X-Files, NCIS: Los Angeles) who has been working steadily for twenty years. He’s got a face you’ll recognize, but not from where, and so I went over to imDb and said, “Oh, yeah. Him!”  Erick Avari (Stargate: SG1, The Brink) has also worked a lot and looks familiar. Here he plays the hubristic scientist who denies all until well after the brown stuff hits the rotator. Kevin O’Connor (Peggy Sue Got Married, The Beast) was fun as a resourceful handcuffed fugitive. I didn’t feel like any of the actors was mugging or chewing the scenery too hard, which was one of the things that elevated Flight to an okay rather than eye rollingly bad movie.

It could easily have gone down that way (joke intended), but Flight is a solid little zombie caper about some moronic 21st century resurrection men hauling a zombiecicle across the pond for some nefarious purpose and sticks her in the hold with a trigger happy guard. Massive turbulence rocks the fridge askew, the guard blasts away the radio, she gets bitey, and we’re off.

There was no hint of social media, and the only message was the standard “science bad”. Basically, the makers just wanted to do cool stuff with zombies on a plane, and there was some really interesting carnage. I especially enjoyed the nun. And I will never use an airplane bathroom again. On the down side, the zombie rules didn’t remain consistent, with varying levels of damage needed to off them. One of the most basic aspects of writing monsters is that once you’ve created a rule you have to stick with it or your audience will notice you’re cheating. Can you shoot them anywhere and they re-die, or does it have to be the brain? Also, does anyone really believe airplanes have people-size air ducts?

If you’re in the mood for some airheaded goofy fun, check this film out. There are some problems with keeping the rules straight and ignorance of how a jet really looks on the inside, but those are easily overlooked if you’re not expecting serious and heavy drama. Just don’t watch it as a double feature with Snakes on a Plane if you’re about to go on vacation.

Flight of the Living Dead Trailer