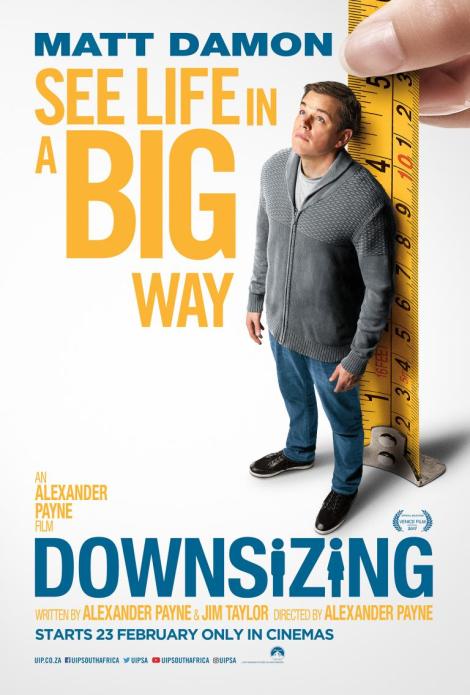 The trailers for this film show a frothy, American science fiction confection, and a viewer might expect a predictable three act structure about a man who loses his wife unexpectantly right in the middle of otherwise completely changing his life. Paul Safranik is a man who never quite gets things right, though he is a thoroughly good guy, and therefore boring. Matt Damon is fantastic in this role because the movie star disappears and he is totally dull. Kristin Wiig, who was also in The Martian with Damon but had no scenes with him, here plays the wife who commits to “downsizing”, or being reduced to a person dwarfed by the average Barbie Doll, and relocated to a small, rich village. Everything is small there, and therefore easy to afford. Everyone is rich. But at the last moment she just can’t do it and leaves Paul gathered into a litter scoop and whisked into his new life alone. He may be boring, but he’s always considerate of other people and downsized for the reduced carbon print on our tired Earth. She was just going along to please him until it got serious and they shaved her head. Love can only stand so much.

Once Paul is in Leisureland the film slowly begins to take some unexpected turns. Paul’s natural fascination with people and science and his innate caring for others takes him to unforseeable places, emotionally and physically. Something you’ll begin to notice more and more strongly is the truly international nature of the film, which is not hinted at in the trailers. Christoph Waltz, one of the great actors in the world today, plays Paul’s tiny neighbor, and Udo Kier is a friend also used to being rich. Rolf Lassgård, Sweden’s most famous actor, is the scientist who discovers how to shrink everything and forms the first small village. Hong Chau is Ngoc Lan Tran, a Vietnamese woman shrunk as punishment for forming protests and shipped to the states illegally in a tv box with other dissidents. She was the only one who survived the ordeal though she lost a leg, which is what catches Paul’s sympathetic eye. The character’s brusque manner and hilarious, deep Vietnamese accent nearly steals the movie. The cgi of her missing leg is absolutely flawless, enhanced by Chau’s incredible physicality. While some people may be irritated by a deep Vietnamese accent they may find stereotyping, they may be discounting the fact that the character is also multi-lingual with a strong social conscience. Add up the character as a whole, and Tran is not as simple as some would have you believe.

I’m trying hard not to give anything away, so I will only say you will not expect the film’s deep social messages and emotional journey.

The movie is slow, and the act structure is a bit warped so it sometimes feels like it’s not going anywhere, but I guarantee you will find it hilariously funny at times, deeply touching and even a little scary on a certain level. Science fiction is used perfectly here, as a means of giving the film a setting that allows a great, sweeping story relatable to everyone in a completely fantastic way. Watch this, but don’t hold on too tightly to your expectations.