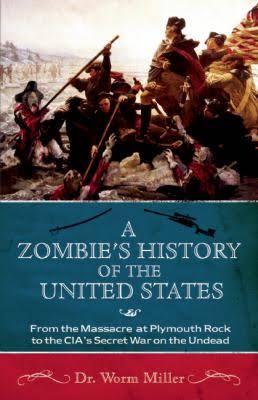 A Zombie’s History of the United States: From the Massacre at Plymouth Rock to the CIA’s Secret War on the Undead

Dr. Worm Miller tells us in his book that the “mobile dead” have been on the Earth for as long as there have been humans, giving us anthropological evidence of “cranially assaulted” zombies 20,000 years ago. His focus being the United States, the author begins in chapter one New World, New Monsters and methodically recounts zombie history until the modern era, when zombie hybrids fought under the flag against the Mujahedeen in Afghanistan. Miller, having done extensive research at the University of Minneapolis’s Zombological Department, is attempting to force back into the light all that has been hidden or removed from the history of our country.

Yeah, this book is really very funny, and would make a nice companion on your shelf under Zombies: Humor, next to your copy of The Zombie Survival Guide by Max Brooks. Within two pages I had laughed out loud, and did so in many other places. There are wonderful sidebars in all the chapters that expand on some important moments in history, like the question of whether or not Abraham Lincoln was a hybrid (sentient) zombie (“anyone who had seen Lincoln eat human food knew he was not a hybrid”), the meaning of the word “croatoan” (the Chesepian Indian word for “walking ghost”), how the movie Night of the Living Dead was “as hate-filled and grotesque as Birth of a Nation”, and why the phrase Remember The Alamo is actually very ironic.

The humor works well because it’s skillfully woven into real history. Events you may not remember from your grade school history, like the pre-revolutionary Bacon’s Rebellion (here a revolt against Virginia’s governor giving colonists zombie-infested land), sits alongside a made up Harron’s War (zombie purge).  If you’re a history geek like me, you’ll find yourself googling things to see if they’re “real” or not, like a Choose Your Own Adventure book.

A couple of times I found the new history disturbing, like replacing the African-American soldiers with hybrid zombies in the Fort Pillow Massacre, or recrafting the Indian War into the “War of the Dead”. I wondered as I read these parts if Miller hadn’t gone over the top in cultural appropriation and if some readers would be horribly insulted.  I don’t know how others would take it, but I will say that Miller appropriates quite a bit of European American history as well, so just be warned if you think the issue may be upsetting.

That issue aside, I found the book to be terribly funny, vastly clever, and very well paced. Miller (the author’s name is Josh Miller) has created an entertaining hybrid of dead serious humorous textbook full of quiet outrage over the mistreatment of American history, and I recommend this for a good time.

CFR: In Addition: Dang it Mildred. Now I want to read this too!