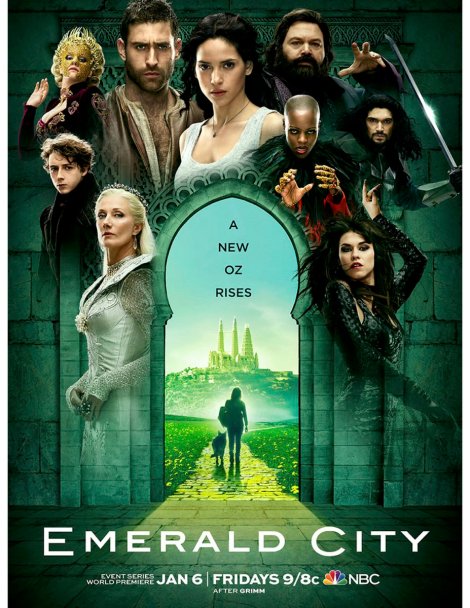 POINTS: Meh. Just Meh. Not that thrilled with it. Yes it is pretty. Yes it has an amazing cast. OMG IT HAS THE MOST BEAUTIFUL COSTUMES I WANT THEM ALL! Yes the special effects are good. Yes it is cool that it The Wizard of Oz was re-imagined.

The re-imaging could have been a hell of more interesting. Or someone could just tell the real story in the books. Or. Whatever.

Hey, if you like the show GREAT Go for it!! Watch and have a good time. I’m just meh, about it.

Now yes there are some good points – very good points! Check out the Bechdel Tests below for some serious joy.

PITFALLS: The Pitfalls involve story and plot so read the bottom of the page  SPOILERS ALERT! if you want to read them.

FEMALE CHARACTER(S): Lots. That is a very cool point!

CULTURAL PITFALL(S): Ok, as you may

DVD/BLU-RAY WORTHY: Well maybe. If it were cheap and Hubby really wanted it.

Ok, here’s my major beef with Emerald City – and I don’t even know if I have the words to properly explain it so here goes.

The character reactions are not appropriate for the action in the scene. In other words, the actors play the end of the scene at the beginning. It’s something my acting teachers warned about. For example: Let’s say that you are watching The Empire Strikes Back. However in this version Mark Hamill as Luke acts like he knows Darth Vader is his father BEFORE Darth tells him. Therefore the responses and actions of Luke would make no sense. You, as the viewer, would feel there was something wrong – and you would be right. That is my major beef with Emerald City.

When Dorothy lands in Oz she goes for a walk and finds a group of people who could pass for Native Americans. Since she lives in Kansas and is now in a place with snow, well, I would think that maybe I was in the Dakotas and behave accordingly. But not. She starts acting like she knows she is in a different reality. No. Just no. And throughout the series she doesn’t evolve in her behavior. She should in the beginning be trying to figure out what the heck and where the heck she is – NOT going with the flows. She acts like she knows what she is doing even though there is no way. It is annoying.

The show would be so much more interesting if Dorothy continually learned about Oz and her “powers.”

This is why this show gets a meh.

Oh and then the big witches are either virgins or whores or evil and OH I’M SO FRAKKING TIRED OF THESE NEGATIVE WITCH STEREOTYPES I COULD PUKE!

So no, I’m not that impressed with the re-imagining.